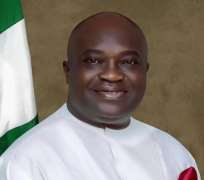 As Abia State marks the 24th anniversary of its creation on August 27, the state governor, Dr. Okezie Ikpeazu, has congratulated the good people of the state for their sacrifice and support in nurturing and growing the state to its current level of development.

Governor Ikpeazu thanked the people of the state for demonstrating an unflinching faith and belief in the state even in the face of daunting challenges, adding that the progress recorded by the state in its 24 years of existence would not have been possible without the devotion and commitment of the citizenry towards the vision of the state.

The governor also applauded the founding fathers of the state, both the dead and the living, who fought doggedly for the creation of the state out of the old Imo State in 1991, saying that history shall remember them for their patriotism and visionary leadership.

While describing the founding fathers as men of good conscience, Ikpeazu said they envisioned a state that will be guided by the principles of justice and equity as enshrined in the Abia Charter of Equity, stressing that this dream must be kept aflame and the labour of our heroes sustained.

He also commended the successive military administrators and civilian governors who have ruled the state from inception for their contribution in bringing the state to its present status, noting that the former leaders laid the solid foundation upon which the current government is anchoring its pursuit of innovation and development for the state.

The governor identified that from a humble beginning, the state has made landmark achievements in human and material infrastructure, stating that his administration is determined to expand the frontiers of these strides and take the state to higher heights.

He used the occasion to further reaffirm his commitment to service to the people, assuring that his mission in government is to uplift the living standard of Abians by improving on the quality of governance, driving a new innovation and creating new opportunities for the citizenry through a total overhaul of the public service system.

He also called on Abians both at home and in the Diaspora to develop a new spirit of patriotism to our state by keeping faith with the government and showing solidarity towards the programme and policies which are all dedicated towards ushering in a new dawn of life.