50 American Medical Personnel To Give Training To Nigerians 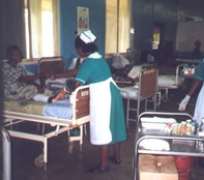 Fifty American medical personnel, including 23 doctors,nurses and medical photographers, have been engaged by District 9125 of Rotary Club International to train Nigerian doctors in two designated teaching hospitals of Ilorin and Abuja to offer expertise on surgery related issues.

The District Governor of the Rotary Club,Dr Mike Omotosho ,who made this known to news men in Yola,said the decision to engage the services of the medical practitioners was informed by the need for more expertise to Nigerian doctors in the tertiary medical institutions in Nigerian for improvement in their services.

According to him,Rotary District 9125 is motivated by its theme this year,which is "Be a gift to the World", stressing that no amount of medical expertise is too small or two big for Nigerian doctors,as every field of human endeavour required updating of knowledge,hence the recruitment of services of the American doctors.

He stated that the American doctors have been enthusiastic of collaborating with the Nigerian doctors in the tertiary health institutions in rendering expertise services ,to them and in turn improve their services to patients.

Omotosho,said he was in Yola to visit Rotary Clubs of the American University of Nigeria,AUN, and that of Yola,and his team of Rotarians were in the ancient city,to render humanitarian services to the Internally Displaced Persons,ravaged by Boko Haram insurgents and are now accommodated in the various camps in the state.

The District Governor,who is expected to relate with the IDPs for two days,donated boxes to the IDPs,containing some basic needs,including blankets,toiletries ,conveniences ,provision of health camps as part of the humanitarian services.

He said the mobile clinics and health camps for the IDPs were very necessary to improve their health condition as parts of their immediate needs,saying a similar gesture was extended to some IDPs in Abuja toward ameliorating their present condition.

According to Omotosho,it is also in the plan of the District

9125 to design a means of integrating the IDPs into the society by empowering them economically so as to be better persons who should should contribute to the growth of the society with their potentials.