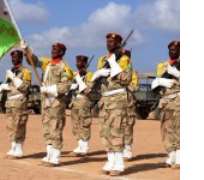 Djibouti Armed Forces (FAD) have formally denied “false allegations” reported by some regional media regarding the ongoing operations in Somalia’s Hiiraan region which is under the control of Djibouti troops.

Media reports had initially indicated that the Djiboutian commander for Hiiraan region had accused Ethiopia of “having a hidden agenda in Somalia.”

“These false reports do not reflect Djibouti’s policy that has ensured a long tradition of good neighbourliness and cooperation with Ethiopia,” FAD Chief of General Staff General Zakaria Cheikh Ibrahim said in a statement.

He said the allegations neither came from Djibouti’s defense ministry nor from the army leadership.

“We wish to state that since the deployment of the Djiboutian forces to Somalia, especially in Hiiraan region, the two armies have cooperated well, sharing both joy and suffering of the Somali population,” he added.

He said the only objective being pursued by Djiboutian and Ethiopian forces is that of bringing Somalia back on the path of peace and stability.

“No country, whether Djibouti or Somalia, has a hidden agenda or achieves its interests by destabilizing Somalia,” he said.

“These defamatory allegations are only meant to sow mistrust between the forces of the two countries and scuttle the peace process in Somalia, especially in Sector 4 where we were preparing to establish a regional government for Hiiraan and Shabeelaha Dhexe regions,” Gen. Ibrahim said.

Since 2011, Djibouti has been taking part in the African Union peacekeeping mission in Somalia with two contingents of 1,900 officers based in Hiiraan region in central Somalia.