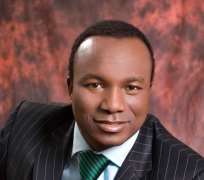 Sunday Adelaja, Pastor of Europe’s largest Congregation, Embassy of God based in Kiev, Ukraine with presence in over 20 countries, have condemned the massive looting that characterized the Nigerian Economy. He has also given statistically proven and well researched reason why the Nigerian economy can overtake that of America, if the looters of the over $150 billion dollar oil revenue had removed their demon infested leprous hand.

Sunday Adelaja, whose ministerial influence has spanned into Armenia, Belarus, Bulgaria, Canada, the Czech Republic, Estonia, Finland, France, Georgia, Germany, Italy, Japan, Kazakhstan, Kenya, Moldova, Poland, Russia, Sweden, Switzerland, Tajikistan, the United States and Uzbekistan, due to his integrity based preachments, has openly declared support for the anti-corruption policy of President Buhari. In this statistic related piece, which I recommend to researchers, analytical minds and those who wish Nigeria well, he explains what can be done to make the Nigerian economy overtake America

Below are abridged excerpts from the piece.
How the Nigerian Economy Can Overtake America

By Sunday Adelaja
let me start by saying that the key to Nigeria’s economy overtaking America’s economy, is in CURBING CORRUPTION

Corruption, that monster that has crippled nations, economies and peoples is our biggest shame and inhibition. If Nigeria could successfully fight corruption on all levels with all our natural and human resource endowments, Nigeria’s economy is poised to overtake America’s economy in the near future.

To start with, we are going to be looking at corruption in terms of Political Corruption which is the use of power by government officials for illegitimate private gain. An illegal act by an officeholder constitutes political corruption when the act is directly related to their official duties. It is mainly done under guise of law and involves trading in influence.

I don’t think I need to waste your precious time my dear readers to try to convince you that our beloved nation Nigeria has broad based corruption. All through the length and breadth of our country, we see corruption everywhere. In the government offices, police check-points, schools, universities, military, Nollywood, media, entertainment industry etc. Friends, no doubt about it, it’s either we exterminate corruption or it annihilates us as a nation.

Let me tell you a short story that relates to each one of us Nigerians and our Ghanaian brethren.

One of the greatest news that has been heard on the African continent in the last decade, is the news of Ghana joining the league of oil producing nations. That singular discovery added so much to the Ghanaian economy that it catapulted Ghana’s economy into one of the fastest growing in the world. It is believed that Ghana currently produces about 400,000 barrels of oil per day, which is equal to 400 million USD per day, based on the 2014 price of $100 per barrel.

Now, listen closely friends.
The same amount of money that has hugely enhanced the economy of Ghana, creating many opportunities and bringing joy to the lives and families of millions of Ghanaians, is the very same amount of crude oil value unaccounted for daily in Nigeria.

In the words of Coordinating Minister and the Minister of finance Ngozi okonjo-Iweala while, addressing the House of Representatives Joint Committee on Appropriation/Finance in Abuja in 2013 said, “We are losing revenue; 400,000 barrels of crude oil are lost on a daily basis due to illegal bunkering, vandalism and production shut-in.”

That is the government official’s way of saying that 400,000 barrels of oil is daily stolen in Nigeria. As of the year 2003 when oil was selling for way above $100, that could be anything between 400-500 million USD per day. Furthermore, if we count 5 working days, it makes 295 work days a year, which equals to 118 million barrels per year, which means 40 billion USD a year. This is only for the year 2013.

Please note I don’t want anyone to think I am attacking President Jonathan or his administration. Whenever I mention any name in this article, it is for clarification not condemnation. The election has been won and lost. Let bygones be bygones. I am simply referring to his government as a matter of fact or reference not for accusation. My appeal to Nigerians is, let us move forward.

If we are going to count how much was lost, only during the government of President Jonathan, then it becomes easy to believe the calculations done by the former Governor of the Central bank of Nigeria Prof. Chukwuma Soludo. He alleged that 30 trillion Naira (the equivalent of 200 billion USD in 2013) was lost to corruption in Nigeria. This is only in 6 years of President Jonathan’s government, from the year 2009 – 2015.

To put that in perspective, the amount of money Nigeria lost in 6 years is bigger than the whole economy of the Ukraine $177 billion, Kuwait $175 billion, Libya $74 billion, Hungary $133 billion, Morocco $114 billion, Romania $189 billion, Belarus $71 billion, Syria $71 billion, Angola $124 billion and Vietnam $171 billion etc. according to the 2013 world Bank statistics for nominal GDP of countries.

The amount we lost in 6 years is half of the whole economy (GDP) of South Africa, Denmark, Venezuela, Colombia, Thailand, Austria, Iran, United Arab Emirates, and Malaysia. Oh my God!!! What a country we would have built if not for the monster of corruption!

“Much food is in the fallow ground of the poor, and for lack of justice there is waste.” Prov. 13:23

I am sure by now; some of you are already getting agitated. When I’m going to talk about how we are going to overtake America’s economy? Where are the proofs that we can overtake them? Well I am taking my time. I first started with information you could easily believe, before I make my case for the title of this article.

There are even more daunting statistics of how corruption has eaten into the fabric of the Nigerian economy.

According to Mr. Obinna Akukwe a UNN trained Financial, IT and Project Mgt. Consultant and Adams Oshiomhole, former Labor Leader for close to a decade, Governor of Edo state, $27 billion dollars that should be in excess crude account has been stolen. Oshiomhole opined that “Nigeria’s budgets for the past three years have been based on the average of $77 and $79, while the average price of the country’s crude has been $108 per barrel, which gives an average surplus of $30 per barrel. “Ideally, we ought to be saving $36 per barrel on the 2.3 million barrel a day over the past three years and if you look at these numbers you will find that what we have in our excess crude oil account should be over $30 billion but as we speak, we have barely $3 billon in our excess crude account,”

Though the NNPC had agreed that under their watch, $ 11 billion dollars was stolen in 2013 alone, we shall still use the conservative figure of $ 5 billion dollars annually to calculate the oil theft. The use of least average in cost computations is applied. The use of 60 months below is the amount of months President Jonathan’s government was in charge of the purse of the Federal Republic of Nigeria.

2. $30 dollars per barrel above budget benchmark of $ 79 dollars not accounted for, meant for excess crude account = $27 billion dollars

Remember that this is the amount that could be logically traced according the people mentioned above. In all, the total still comes to an average of $200 billion according to Prof. Soludo’s account for the last 6 years of President Jonathan’s administration.

“So when they were filled, He said to His disciples, Gather up the fragments that remain, so that nothing is lost.”Jn. 6:12

Let me try to paint a vivid picture of what $200 billion USD would mean to a layman.

• $200 billion dollars could have translated into millions of vaccinations for children, which could have saved the lives of so many kids.

• $200 billion dollars could have become thousands of kilometers of roads constructed.

• $200 billion dollars could have become thousands of schools built.

• $200 billion dollars could have become thousands of hospitals in every town in Nigeria.

• $200 billion dollars could have become 100% water supply in all towns and villages of Nigeria.

• $200 billion dollars could have resolved our electricity problem, giving us 100% supply to every home.

Let me however remind you that we are only talking here of the money that is lost only in the oil sector of Nigeria.

Let’s paint another picture. Dubai has become one of the wonders of the 21th century and the wonder of Dubai itself is called the Burj Khalifa building. It is the tallest building in the world measuring 2, 723ft. For comparisons sake, it was built for 1.5 billion USD, which is “chicken change” to our politicians in Nigeria.

If we are now saying, that in 6 years we lost 200 billion USD, with that amount of money judiciously used, every state capital in Nigeria will have their own Burj Khalifa building. That on its own would make Nigeria a tourist attraction, more than Dubai and maybe more than the United States of America. Nigeria only has 36 states. After constructing this massive structure in every state, we will still have enough money to build over 70 more of such structures.

What I am trying to say is that the harm corruption is doing to our country is so bad that I advocate for every Nigerian, at home and abroad, to join the crusade against this deadly practice in our nation. We have to fight it with everything we have. “The duty of youth is to challenge corruption.” - Kurt Cobain

Because of corruption:
i. We don’t have enough universities. As a result, our young men and women are scattered all over the world looking for admissions and spending billions of parental hard earned money in the process.

ii. Our teachers and professors cannot be properly paid, leading to incessant strikes, boycotts and closures.

iv. Millions of children are dying of malnutrition and lack of food.

v. So many families go to bed on empty stomachs.
vi. Our maternal and child-mortality rate is one of the highest in the world because of our substandard medical services.

vii. Our roads claim thousands of lives each year because of their deplorable state.

viii. Investments are kept out of our economy.
ix. More than half of the population of Nigeria lives on less than 1USD per day.

x. The actions of militant groups in the Niger delta and even such deadly organization as Boko Haram, Kidnappings etc. are all fueled directly or indirectly by corruption.

The first thing we must get right is declaring war against corruption. From there, we can begin to put our resources into building a modern and civilized nation and continent.