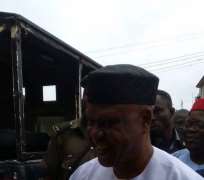 The All Progressives Congress (APC) Delta State and its governorship candidate in the 2015 elections, Olorogun Otega Emerhor today (August 25) rekindled hope of their victory at the Tribunal as Honourable Justice Nasiru Gunmi admits the Independent National Electoral Commission's (INEC) Delta voters accreditation DataBase as Exhibits 1 and 1B respectively.

The Voters Accreditation Database admitted by the Tribunal will of a necessity help the course of justice as it will add substantial weight to the evidence of the petitioners in relationship to facts in issue, particularly rigging and other electoral malpractices engineered and perfected by the Peoples Democratic Party (PDP) and some compromised INEC staff during the conduct of the gubernatorial elections in the State.

Delta APC and Emerhor in a statement by Director of Media and Political Communication, Dr Fred Latimore Oghenesivbe said the Tribunal Chairman, Justice Gunmi has exhibited uncommon integrity and impartiality in the ways and manners he has been fair and reasonable to parties in the matter. Part of the statement reads:

"Today, the APC and its governorship candidate rekindles hope of victory and substantial justice as the election tribunal admits INEC Voters Accreditation Batabase as exhibits 1 and 1B at the on-going trial. We are indeed beginning to see bright light at the end of the tunnel.

"We see the hope of Deltans recovering their stolen mandate becoming a reality and we shall solely rely on God Almighty and the judiciary to liberate Deltans from socio-economic slavery, gross underdevelopment, acute poverty and looting of our common wealth occasioned by the over 16 years misrule by PDP in the state.

"We thank our party men and women as well as progressive Deltans from the 25 local government areas of the State for their solidarity at the on going trial at the tribunal. We shall continue to press forward without any fear of intimidation and harassment until justice is fully obtained for the good people of Delta State, our great party APC and its governorship candidate, Olorogun Otega Emerhor.

Oghenesivbe further asserted that the tribunal has been fair for resisting all manner of fabricated legal technicalities cooked up to frustrate and pervert the course of justice by the PDP and their legal team.

The integrity of the tribunal and the Honourable Justices are intact due to the high level of impartiality and adherence to the principles of fair hearing so far exhibited at the trial, the statement added.