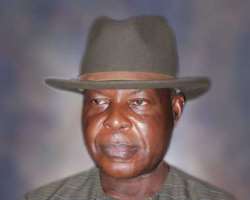 The recent slap-on-the-wrist punishment, as it were, handed down by the Independent CorruptPracticesand Other Related Offences Commission to the Chairman of Police Service Commission, Mr. Mike Okiro, after the Commission's report of investigations into allegations of graft levelled against him by a PSC worker, Solomon Kaase, who petitioned the ICPC in May, 2015 over alleged moves by Okiro to swindle the PSC to the tune of N275m, is unacceptable and does not portray the seriousness towards the much taunted fight against graftin the country by the present administration.

The former Inspector General of Police was accused in May, 2015, of some hanky panky in the management of the Commission's fund. He was believed to have benefitted heavily from the behemoth of financial frauds and reckless spendings that went into the failed re-election bid of the former president, Dr. Goodluck Jonathan, in the March general elections. Okiro collected N350m on behalf of PSC, which money was meant for the training of 900 staffof the Commission for the election.

But as it turned out, the actual number of officers and staff working with the Commission and who eventually underwent the training were 391 and not the 900 claimed by Okiro. The following words of the Commission are quite instructive and revealing; "Investigation findings revealed that the commission budgeted for training of 900 (members of) staff and to conduct training in Abuja, Lagos and Kano. However, the entire work force was not more that 391 and that is the figure actually trained in a programme held in Abuja only. The commission accepted the explanation that due process could not be adhered to strictly because of time constraint.”

Apparently, it would seem that the Commission overlooked the possible collateraleffects of such fraudulentacton our national psycheand its impact on the current fight against the scourge when it submitted that "Consequently, this Commission hereby directs as follows that the total balance of N133,413,845.99 from the N350,000,000 2015 election monitoring exercise domiciled within FCMB be remitted to the Federal Treasury through the ICPC Recovery Account No.1012929790 at Zenith Bank Plc,”. It appears largely that Nta Ekpo and his Commission only concerned itself with the amount involved. Perhaps, the commission felt there was no point pressing criminalcharges against the retired police boss since the amountinvolved does not fall within the usualbillions of naira the thieving public office holders and politicians often steal from the nation's treasury.

It is highly regrettable and unfortunate that the Commission took this unpopular stance. It needs to be reminded that corruption is a crime against humanity. Andlike the President himself admitted at the ongoing Nigerian Bar Association's Conference, corruption is worse than human rights violation. It is completely of no moment that the amount of money stolen was meagre. Sometimes,it doesn't necessarily have to do with financialmisappropriation. An abuse of office or power is of same consequence withstealing billions of naira. And if the Commission had viewed the PSC'boss action in this light, it sure would have taken a more far reaching decision on the issue.

The agitating question then is : What could have informed this irrational decision by the Commission? Indeed, the only answer that readily comes to mind is that the Commission seems to befinding it extremely difficult to disentangle itself from the web of its former modus operandi underthe lastregime, which incidentallydid not recognise stealing as corruption, aposition the Commission publicly and regrettably aligned itself with. Little wonder, it practically went into a hibernation mood for the six years the regime lasted. Or was the Commission oblivion of the fact that the PSC Chairman's action runsfoul of Section 19 of the Independent Corrupt Practices And Other Related Offences Act, 2010 (as amended), which elegantly states thus :

"Any public officer who uses his office or position to gratify or confer any corrupt or unfair advantage upon himself or any relation or associate of the public officer or any other public officer shall be guilty of an offence and shall on conviction be liable to imprisonment for five (5) years without option of fine."?

There is an urgent need for the Commission to go beyond this pulsating method. It should exercise its prosecutorial powers againstthese pilferers just so it setsan exampleand serve a warning to other prospectivepublic thieves in the future. Whoever that was indicted in that report should be made to face the music squarely, but certainly not this bland and dilly-dally verdict.

President Mohammadu Buhari must call for the review ofthis decision if he wants Nigerians to take his administration's campaign against corruption seriously. In my view, this is a litmus test for Buhari. Okiro and the indicted individuals, in addition to the return of the misappropriated fund, must be subjected to the instrumentality of the relevant laws of the land. Thankfully, the Commission appears to have carried out a thorough investigation into the allegation. Proving its case, therefore,won't posemuch challenge in court.But above all, it is important Mr. Nta Ekpo and his Commission understand that crime without punishment breeds greater crimes and enthrones the culture of impunity.

Disclaimer: "The views/contents expressed in this article are the sole responsibility of the author(s) and do not necessarily reflect those of The Nigerian Voice. The Nigerian Voice will not be responsible or liable for any inaccurate or incorrect statements contained in this article."
Articles by Okoro Gabriel Bryne
15-4-2016  A Presidency’s Town Hall Meetings Without The President?11-11-2015  Afenifere: A Derailment Foretold5-10-2015  Fight Against Graft: Better Late Than Never8-9-2015  Containers Fall: Time To Enforce The Law18-8-2015  In Defence Of Justice Oloyede FolahanmiMore...