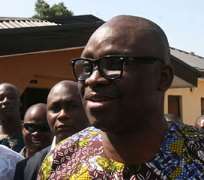 To give the physically challenged in Ekiti State a sense of belonging, Governor Fayose appointed a blind radio presenter, Rotimi Bejide as member, Christian Pilgrims Welfare Board.

The governor also appointed a Ibo man, Prince Jonathan Eze Nwaberioku and Urhobo man, Hon Francis Omorioghoye as members of the Board.

Chief Press Secretary to the governor, Idowu Adelusi who made this known in a release issued in Ado Ekiti on Sunday, said the governor will be equitable to all.

Appointed as chairman of the Christian Pilgrims Welfare Board is Mr Ojo Adewale, while other members of the Board are; Mrs Atinuke Agbebunmi, Mrs Juliana Elemo and Mr Adeniyi Adebolu.

Also, in preparation for the conduct of Local Government elections in the State, the governor has also sent nominees into the Ekiti State Independent Electoral Commission (EKSIEC) to the State House of Assembly.