Validity Of Akwa Ibom APC Gubernatorial Candidacy: The Facts And The Lies 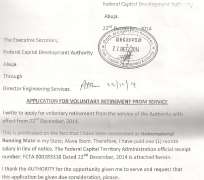 The social and mainstream media has been saturated by series of malicious, false and concocted stories by paid and unpaid agents and hireling of Mr. Udom Emmanuel, Sen. Godswill Akpabio and the Peoples Democratic Party (PDP) in Akwa Ibom State alleging that Engr. Benedict Ukpong the deputy gubernatorial candidate of the All Progressives Congress (APC) in Akwa Ibom State did not resigned or disengaged from the public service before the election as required by law, and as such, that the joint candidacy of the APC gubernatorial candidate Umana Okon Umana and his running mate is invalid.

However, contrary to these malicious reports aimed at diverting attention from the monumental setbacks suffered so far at the Tribunal by those sponsoring these lies, I wish to present to the public documentary evidence that of a truth Mr. Ukpong had legally and effectively disengaged from his employment at the Federal Capital Development Authority (FCDA) based on the outcome of my independent investigation.

For emphasis, Section 182 (1) (g) of the Constitution of the Federal Republic of Nigeria 1999 (as amended) requires that a person seeking to contest election to the Office of governor and deputy governor should retire, withdraw or resign at least thirty (30) days before the date of the election.

On 14th January, 2015 an unconditional approval was given by the Office of the Director of Finance and Administration of the FCDA for Mr. Benedict Ukpong to voluntarily retire from service effective 22nd December, 2014. Please find attached the letter of approval. The implication is that he had retired and disengaged from service as required by law more than ninety (90) before the April 11, 2015 gubernatorial election.

However, the FCDA erroneously continued to credit his account with salaries after his retirement. Mr. Ukpong who does not believe in reaping where one didn't sow retrieved and subsequently returned same to the FCDA. A copy of the official receipt issued upon return is available and also in my possession.

We all know that such official slip is a regular occurrence in our public service with its well known bureaucratic pitfalls. In any case, public servants do not pay themselves. They have no control over their salaries. There have been countless cases where people receive more or less than what they are lawfully entitled to which is usually rectified subsequently. I know individuals that have experienced this in the past.

Also, it is humbly submitted that even if the funds wrongly credited by the FCDA in his bank account were not returned by him it would still not affect his legal qualification for election. At worse, it would have only raised a moral question. But Mr. Ukpong went further to fulfill all righteousness by returning it despite the fact that the FCDA has not paid him his retirement benefits. Some Nigerians would have simply kept the money.

It is trite that qualification for election is a pre-election matter which can only be litigated at the High Court. Even if it can be raised at the Tribunal, the right party that ought to raise it is the Petitioner(s) by virtue of Section 138 (1) (a) of the Electoral Act 2010 (as amended). And if for want of argument as in this instance the Respondents decide to canvass it at the Tribunal it has to be part of their Reply to the Petitioner's petition. Neither Udom, INEC nor PDP raised this issue in their Reply(ies). They cannot smuggle it in by Motion.

We all know that those sponsoring these reports have been having consternation at happenings at the Tribunal. In order to diffuse the effects of the consternation, they ran to their 'Abobaku' for this childish propaganda just to divert attention from what is going on at the Tribunal.

Since the commencement of the proceedings at the Akwa Ibom State Governorship Election Tribunal, Mr. Udom Emmanuel, the PDP and their agents have been chasing shadows; resorting to one propaganda or the other. They have tactically evaded any demand to defend their so-called "victory" at the Tribunal. There is nothing they haven't done to frustrate the petition. But in all, they have failed and will continue to fail.

That was how they concocted falsehood that our President, Muhammadu Buhari, didn't have the necessary educational certificates to contest for the presidency. In the end, they failed woefully and Buhari won. Since they haven't learnt lessons, history will repeat itself. OFFICIAL LETTER OF RETIREMENT FROM THE FCDA