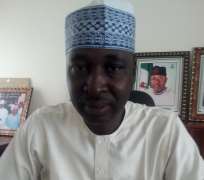 A lawmaker in the Adamawa House of Assembly, Hon Hassan M. Barguma, says is sponsoring a Bill that will revive the ravaged communities in the seven attacked LGA in the state.

According to him there is nothing more important in the areas destroyed by Boko Haram than making sure they revive their means of livelihood.

The member who is the chip whip of the House and representing the people of Hong LGA will be co-sponsoring the Bill with other members who are representing the other communities damaged by insurgents.

Hassan is also the chairman committee on information told our reporters that the idea of establishing a ministry of North-east region is not really needful as the issue of Boko Haram is certainly going to die a natural dead.

"In my own opinion establishing a ministry that will see to the problems of North-east agitating by many people is not what is needful, I certainly know one day Boko Haram will die a natural dead, then what will be the fate of the ministry if created, is going to be a redundant ministry".

"What this people need is to come to their immediate problems of settling them by building their destroyed homes, markets, places of worship, revive their means of livelihood and provide jobs to our teaming jobless youths who are the back bone of every economy". Hassan said

Hassan also stressed that their good working synergy with the state Governor who was once time a lawmaker and the speaker of the House is going to be a smooth journey to providing laws that will help their people.

When asked about the recent screening of 21 commissioner and dropping one commissioner from Mubi south, Ahmed Sajoh, he replied that the commissioners cleared are those qualify to be cleared and the one not cleared is because is not qualify.

"We don't nominate commissioners, ours is to confirm their credibility so the Governor brought those he feels he wants to work with our objection is only when nominees don't meet up with the standard requirements nothing like god fatherism we only did our job as lawmakers". He added