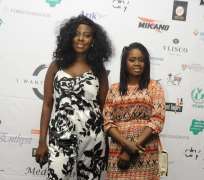 After a successful Lagos premiere, A-list Actress, Director and Producer Stephanie Linus hosted another premiere in the nation’s capital and it was nothing short of spectacular!

Aside from the fact that everyone who attended attested to the excellent quality and message behind the movie, the turn up of dignitaries and guests at the premiere is something not very common among such events.

Also present were Charly Boy, Charles Novia and some cast members of DRY including Zubaida Ibrahim Fagge, Hauwa Maina, Paul Sambo, Anna Tanko as well as representatives from the World Bank and AIR Peace. The event took place on Thursday 13th August at the Silverbird Cinema.

The movie was written, produced and directed by Nollywood’s A-List actress, Stephanie Linus, who also starred in the movie. Her husband Dr Linus Idahosa who was also the Executive Producer of the movie was present to give his support.

DRY is based on a true story that follows a trail of Zara’s (played by Stephanie Linus) trip to Africa, her constant turmoil as a result of inexplicable horrors from her childhood, her experiences and heartaches while working with child brides, against the backdrop of a rich African culture. It is full of intrigue, suspense, surprises, the joy of reconciliation that is guaranteed to captivate and engage moviegoers.

The film stars: Darwin Shaw as Dr. Alex, the legendary Liz Benson Ameye as the Matron, Bill McNamara as Dr. Brown, and Introducing Zubaida Ibrahim Fagge as Halima the teenager who had to endure a life not designed for a child: to be married to a man who was more than four times her age. Produced by Next Page Productions, this film was supported by the Office of the special adviser to the president on MDGs Nigeria, Aberystwyth University Wales, Diamond Bank, Ford Foundation, Project Act Nollywood, USAID Acquired Fistula Project, Vlisco and more.