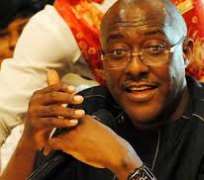 Coming on the heel of his suspension in his native Otolo, Nnewi Ward I, ratified by his local government – Nnewi North, Anambra state chapter of the Peoples Democratic Party, PDP, has suspended the party’s National Publicity Secretary, Chief Olisah Metuh, from its fold.

The terse statement reads: “Following the suspension of Chief Olisa Metuh by the Otolo Ward 1 Nnewi of the PDP (where Olisa hails from) and the ratification of same by the Nnewi North Local Government chapter, the State executive committee, after assessing the weighty allegations against Olisa Metuh and finding them heinous, in compliance with the PDP Constitution, hereby, ratifies the suspension and forward same to the National Working Committee (NWC).”