[Must Read] An Open Letter To Skiibii And Linda Ikeji 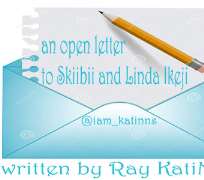 CONTENT OF THE LETTER
Dear Skiibii
It is my wish that this letter reaches you in good fate, but if you are still dead, I believe one of your label mates will read it to your hearing.

To start with, I want to welcome you to limelight. I know you shouldn't care about what people are saying because the most important thing that matters to you is fame. After all, fame is fame no matter how it is attained.

Few months back when I heard, "Five Star Music Signs a New Artiste" I didn't actually know that the artiste goes by the name “Skiibii” until yesterday when he supposedly slumped and died. I wasn't the only one left in that state of Chaos. Then few hours later, the news changed. "Skiibii alive and recuperating in a private hospital” Awesome strategy, he dies and rises just like Jesus Christ, I said to myself.

News can change a million times but my question is, now that you have gotten to limelight through this means, what happens next? I know that the "SINGLE" which you are promoting will get as many downloads as possible as soon as it hits the internet, but my question remains, "what next?" If you can die and rise from dead just to promote a single, what will then happen during your album promo? Are we expecting something like "Five Star Music Artiste Collapses and Disappears at the Airport? That's funny huh? I tell you it is indeed ludicrous too.

Sometime in October 2012, a conspicuous and an outrageous thing happened in "ALUU" a community in Rivers State and the first blog to capture this incident/news was Linda Ikeji's blog and this particular incident made her blog famous. However the petinent question that arises is, Nigeria, shouldn't news be verified before posting?

Linda, as a top blogger I guess you are feeling like a godess who wakes up and goes to straight to her PC and posts whatever without verification, maybe just to gain traffic or should I say just to retain returning visitors. As a super star blogger, I believe you should atleast have the contacts of Soso Soberekon who is the Five Star Music Manager, Harrysong or that of Kcee which you should have used to confirm the news before posting, or should I believe the trending news that you were paid to fake Skiibii’s death. And ofcourse the news wouldn't have gone viral without the aid of other bloggers who in turn coppied your post verbatim without editing or even verifying the authenticity of it.

Whether Skiibii’s death was faked or not, it has already gotten beyond the boundary of expectation of the plotter and I can see regrets behind smiling faces. I really can’t imagine someone coming of with such a myopic idea in a sensitive key word like “Death and Life,” I don’t mean to insult anyone but I swear it is the worst way to “blow” as Nigerians would put it. Skiibii, if your management actually is behind this, then I tell you it is indeed a good “wrong managerial skill” and could mare or hinder your musical career if care is not taken.

On the other hand, you have insulted many innocent bloggers who were seen as rumour mongers by their blog readers. I just wish they will all post your almighty songs whenever they drop. As for the side of your fellow artistes who used your photos as display pictures all over the social media, I think you have a word or two to say to them.

I have this story to tell you, in a certain community, there lived a man who oneday shouted "Wolf! Wolf!! Wolf!!!" His neighbours came running for his rescue only to get there and the man said "There is no Wolf!" the neighbours left in disappointment. The day the real wolf came he cried for help and the neighbours thought it was his usual joke and he was devoured by the wolf.

You must forgive me for breaking all the fundamentals of letter writing, I know it's none of my business but I wrote because, "A Story That Must Be Told Never Forgives Silence." All the same, you have gotten a lot fans to yourself and you must not forget that every fan produces either mild, cold, warm or hot breeze depending on the weather though. I know you understand.

Skiibii, I wish you quick recovery and success in your music career, as for you Linda, I believe you already know we are friends. Permit me to go back to sleep.

My name is Ray KatiNns and I am not a hater. IG. @raykatinns | twitter: @iam_katinns

THANK YOU FOR YOUR CONSISTENT ASSISTANT. I HAVE ALSO SENT YOU AND ATTACHMENT OF THE LETTER AND ART IN CASE YOU FEEL LIKE OPENING IT WITH MICROSOFT WORD. THANK YOU AND FEEL FREE TO SEND IN YOUR MAIL ANYTIME.