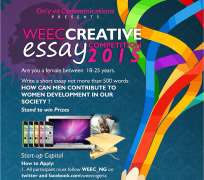 LAGOS, Nigeria – In a bid to support and reposition the female gender for growth, Women Empowerment and Enlightenment Campaign ( WEEC ) is organizing a creative essay competition for young girls within the month of August. The online competition which is targeted at females between ages 18 – 25 years in Lagos, will run from August 10 th to 31 st of the same month. It strives to educate, prepare young females for later life and identify potential talents with productive mindsets.

WEEC essay competition has a theme - “How Can Men Contribute to Women Development in Our Society?” to help writers express their thoughts, creative perspectives, social development plans, solutions for gender equality, and a new cultural value system. The editors of On’y va want writers to share their most important and relevant position that can change the status of women forever, whether it has been executed before or not.

To enter the competition, participants have to send a nonfiction essay not more than 500 words to [email protected] and stand a chance to win exciting prizes like mobile devices, laptops, scholarship grants and start-up capitals for entrepreneurs. The editors will select 50 out of the first 1000 entries submitted by August 31st and results will be announced on select news portals based on novelty, creativeness, writing style and the relevance to theme.

In a chat with Kayode Odukoya, Head Coordinator, WEEC, he said “The essay competition is a platform created to help develop growing ladies with the possibilities of catching them young. This is just WEEC’s little way of contributing to education growth and we plan to organize the essay competition yearly with a mission to transform Nigeria into Africa’s hub of creativity in the next decade.”

Odukoya also noted that aspiring and experienced writers stand to be selected for interesting and intellectual pieces, which will be showcased for all to see with the aim of encouraging other young females. The Women Empowerment and Enlightenment Campaign (WEEC) is saddled with the sole responsibility to help female individuals so they can strive to be the best in any chosen career, he said.

Furthermore, the creative essay competition is part of build-up activities to the #WEECman 2015 event in September which is a male discussion forum of top professionals with the theme ‘Men Standing Up for Women’. Other events to help re-position the female gender includes Mentorship & Strategy with Women of Value, the 1000-Man March around Lagos Central Business District, and a novel music concert tagged ‘Best of Females’.

WEEC is a product of On’y va Communications, a public relations and content development agency based in Lagos Nigeria and the premiere edition was held in 2013. The WEECman initiative is an offspring of WEEC which is an advocacy based campaign geared towards encouraging agents of socialization to groom men for women support. Interested groups and individuals can follow the conversation of Twitter @WEEC_NG, facebook/weecnigeria and catch a glimpse of notable personalities on Instagram @WEEC_NG.