Senator David Umaru Can Come From TIMBUKTU: So What? 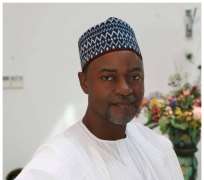 I have been reading with fascination the debate generated by Senator David Umaru’s honest opinion about the zoning of political offices as is being currently done in Niger State by the ruling APC government of Abu sani of Niger State.

Senator Umaru spoke his mind when he criticized the appointment of an SSG from the same ward and Local Government in Kontagora with the Governor. Senator David Umaru bluntly told the Governor exactly what is wrong with that appointment. He said that the position ought to have gone to Zone ‘B’ which he represents since the Deputy Governor is from Zone ‘A' with the Governor coming from Zone ’C'. So for the Governor to choose SSG from the same Zone ‘C’ as himself is a political misnomer and miscalculation and an affront on the constitution of Nigeria which enjoins equitable distribution of political offices.

Senator Umaru further revealed that even the Zone ‘C’ that produced the Governor did not give him the kind of volume of Votes the people of Zone ‘B’ (His Senatorial Zone) gave to Governor Abu Sani during the last Governorship elections.

Why blame and use unprintable names on Senator David Umaru because he has simply spoken the Truth? What volume of Votes did Governor Abu Sani get from the Zone’C’ he comes from compared to Zone ‘B’ where the Senator represents? Obviously you cannot compare votes from Zone ‘C’ with votes from Zone ‘B’ of Senator Umaru. The difference is clear.

Ordinarily, Governor Abu Sani should have compensated the people of Zone ‘B’ with the appointment of an SSG as a mark of appreciation for their overwhelming support during the governorship elections and as a mark of respect for the party’s zoning formula of elected and appointed officers.

I don’t want to belittle myself by writing to defend the origin or where David Umaru comes from. The fact of David Umaru's "indigeneship" of Niger state has never been in doubt. David is a full blooded and patriotic Gbagyi from Kaure. Yes, Kaure! Yakubu Datti and his co-travelled are choosing to expose their ignorance of their knowledge of the geography of Niger state and the Gbagyi people who constitute about 90% of the population of Zone B. Yakubu Datti is a Chadian from Chad so he cannot know where exactly Kaure village is. For his information and education, Kaure is a village in Kwaki/Chukuba Ward in Galadiman Kogo District of the Shiroro LGA. Nonetheless, the fact remains that David Umaru is a Nigerian first and foremost. He can come from the moon, what is important today is whether or not he has contributed to the socio-economic development of the area he now represents. In Nigeria, we all have our origin: David is from Kaure; Yakubu Datti is from Chad, etc.

But firstly, let's look at who Yakubu Datti is:

I can authoritatively say that Yakubu Datti is from Chad. His late father having been born and bred in Chad Republic, came to Maiduguri in search of greener pastures and followed a trailer loaded with cows enroute Lagos. When they arrived Paiko, the Late Mallam Datti decided to stay in the house of one Late Mallam Baba Nata’ala and at the heels of the setting up of the Minna Municipal Authority. The Late Mallam Datti later migrated with his younger brother, Alhaji Umaru Audi to Minna and settled in Sarkin Hausawa’s residence (Late Mallam Mu’azu). A check at Yakubu Datti’s Primary School records reveals that he attended NA Primary School Minna with the name Yakubu Datti Paiko. He is equally not a native of Minna nor an indigene of Niger State nor is he a Nigerian since his father is from Chad. What exactly is even the full name of their father? Datti only means "Datijo" i.e "elder"in English.

Having settled in Minna, the Late Datti was appointed the first Sarkin Yakir of Minna by Late Emir, Alhaji Ahmadu Bahago and charged him with the responsibility of the prison and prison warders: the present family house of Yakubu Datti is an old prison yard where captive slaves and thieves were kept before the construction of Minna prison. Yakubu’s father with the Late Wakilin Doka were in-charge of this prison. Soon after the construction of Minna prison, the Late Datti unlawfully converted the Native Authority Prison to his personal residence till which the family occupies till date. So everybody came from somewhere. For Yakubu Datti to talk about David not being an indigene is a case of "Pot calling Kettle Black."

On the issue of David Umaru’s promotion of Christian Agenda, I say Yakubu Datti got it wrong. David Umaru’s Chambers in Minna; Cosmic Chambers of over 25years has had mostly muslim lawyers. Barrister Tanko Beji, the State’s present Deputy Chairman of PDP was nurtured and produced by this respected Chambers. Tanko Beji is a Muslim; Barrister Gambo Usman,(Muslim & a former D.G), Barr. Aliyu Sadat (Muslim & Legal Adviser & Company Seceretary) all went through the chambers. Barrister Mohammed El-Surur, a muslim, currently heads the chambers. So why the grouse ?

Ok, assuming, but not conceding, that David Umaru is not from Niger State yet he has invested heavily in the professional and economic development of Nigerlites. Can that be said of Yakubu Datti who has nothing to show in his 67 years life? We should acknowledge and encourage individual achievement devoid of sentiments in our writings. Yakubu Datti need not be jealous nor exhibit his hatred and disdain for David Umaru and the community that has been kind enough to host him over these years. It is understandable if he is doing this to scout for a job to make up for lost time. Obviously, it is not in doubt that at 67 years of age, there isn't much time left but there should be no need for bootlicking and sycophancy to get attention. There are many other decent ways to exploit in order to get a job !

David Umaru could come from Timbuktu. So What?! Someone who once ruled Niger State had come from Yan Tumaki in Katsina State while another migrant from Niger Republic via-Sokoto ruled us for another eight years and nobody is complaining. Why David ?

The critics of Senator David Umaru have added to his Political BOOMLET.