Wike Launches His Assault On Amaechi, Buhari Through Surrogates 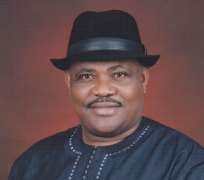 On Thursday, July 30, 2015 the Rivers State Chapter of All Progressives Congress placed a press release in the public domain revealing that Governor Nyesom Wike and his aides had concluded plans to unleash unprecedented assault, through spurious publications, on the reputation and character of the former governor of Rivers State, Rt. Hon. Chibuike Rotimi Amaechi in order to paint the latter as a corrupt individual. Three days later, the former governor confirmed the position of the APC at a public event, specifically mentioning the Chief of Staff, Government House, Mr. Emeka Nwoke as one of the arrowheads of the plot.

Jolted and fazed by the pre-emptive revelation by the APC, it took Gov Wike four days to react to the APC accusation. In his denial made in a press release by his Spokesman, Mr. Opunabo Inko-Tariah, the governor clearly stated that the accusation was patently false in its entirety.

However, on the 3rd of August [a day after the governor’s bare-faced denial], the plot fully manifested by way of highly mendacious and misleading publications filled with manifest falsehood and concoctions all aimed at denting the character and person of Rt. Hon. Chibuike Amaechi with a view to damaging the rising profiling and incorruptible record of the former governor and therefore diminish him in the eye of Nigerians.

One of the publications is a 2-page affidavit allegedly deposed to by one Livingstone Wechie, a PDP member who also claims to be the Media/Publicity Director of a nebulous group by the name Integrity Group accusing Rt. Hon. Chibuike Rotimi Amaechi of various corrupt practices when he was governor of Rivers State. This spurious material was published in theDaily Sun [p. 52 & 53] and Thisday[p. XIV & XV] of Monday, August 3, 2015.

Yet in another publication in the same Thisday newspaper of Monday, August 3, 2015 [p.XVI], a non-existing group going by the name Association of Former Elected PDP Local Government Council Chairmen in Rivers State published a press release in which it accused President Muhammadu Buhari of witch-hunting in his anti-corruption fight. The poorly written publication incoherently rambled from the matter of arrest of Dame Gesila Khan to what it called corrupt practices of former governor Chibuike Amaechi.

In summary, it is now evident to all that the alarm raised by the APC was credible as confirmed by the present actions of Governor Nyesom Wike. It is obvious that the scheme was planned to be multidimensional in nature and to be executed by proxies of the governor to avoid direct confrontation with President Buhari-led Federal Government.

An example that Gov Wike and his men have decided to make the war a proxy one stems from the individuals and groups being used. Mr. Livingtone Wechie who deposed to the affidavit is a known PDP member. His name was published as a member of the Media & Publicity Committee of the Rivers State PDP Governorship Campaign Organisation in The Nationnewspaper of Saturday, January 24, 2015. On the other hand, the Association of Former Elected PDP Local Government Council Chairmen in Rivers State does not exist but contrived by Emeka Woke, the present Chief of Staff of Government House who was once a 2-term Emohua Local Government Council Chairman.

The APC would like to advise the Governor of Rivers State, Barr. Nyesom Wike to desist from the fruitless and obsessive project to bring down Rt. Hon. Chibuike Rotimi Amaechi based on his fears that bother on the saying that the guilty is constantly and perpetually afraid of his shadows. The power to allow anyone go down belongs to God and not man.