Wanted: A strategic and constructive Competition Between Ndigbo and Yorubas, Necessary to build a prosperous SouthEast and a Prosperous Southwest 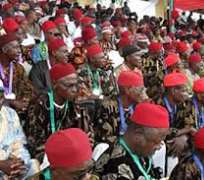 Ndigbo and Yorubas since Nigeria's independence, and even before it,

and as the last elections show, have been engaged in unproductive

distrust. They have been mostly on opposite sides of the political

spectrum and generally do not see eye to eye on national issues. It is

time that these antagonisms stop as they are neither helpful,

productive, nor augur well for state, regional, or national

development.
There are allegations of scheming out of one group by another in Abuja

in government ministries and parastatals. The sharp divisiveness is

The mindless preoccupation with ascendancy in far-flung Abuja, must

stop as there has been little, if any, significant benefit to either

region when Ndigbo or Yoruba persons occupy elevated positions in

Abuja!
I propose a solution.
Yorubas and Ndigbo should employ their God-given resources and

talents for the socio-economic development of their states and region

each region.
Yorubas and Ndigbo should apply and concentrate their energies,

resources, and abilities, not in mutual recriminations, or jockeying

for advantages in Abuja, but in developing each of their states and

regions to a world-class standard.
No excuses will suffice. Nobody stops Ndigbo and Yoruba governors from

performing spectacularly in their states and regions. No one stops

Ndigbo and Yorubas from supporting their states and regions with

their resources and talents.
It is time for a cease-fire from the perrenial verbal vituperations.

develop the states and the regions.
A comparison of the economies and budgets of the states of the

population, Singapore, should spur Yorubas and Ndigbos to action.

respectively, compared to about $50 billion US dollars for Singapore,

a country less than the size of Lagos or Enugu, and a population of

only about 6 million people!
Yet Ndigbo and Yoruba people worldwide each have an estiimated gross

annual incomes of over $250 billion US dollars, or a total for both

groups of over $500 billion US dollars. The budget to income ratio for

both regions is astonishingly low: less than 1% for each of the two

regions!
Singapore marshalled its people and resources to build a world-class

city-state with first rate infrastructures for its citizens. It has

full employment and excellent educational and social services for its

peoples. Its GDP of over $300 billion US dollars is comparable to the

estimated combined GDP of the Southwest and Southeast with a combined

than Singapore!
It is now time for a joint leadership forum of governors and civil

each region needs to pay for the infrastructures that will propel

regional socio-economic development. This will enable both the

Southwest and Southeast to break the addiction of, and dependence on,

the oil resources of the Southsouth.
Enough of the destructive rivalry between Yorubas and Ndigbo! It is

time for Yorubas and Ndigbo to engage in cooperation or constructive

competition that will stimulate socioeconomic development in the

states and regions of the Southwest and Southeast.
The joint leadership forum of governors and civil society in each

region can use Singapore as a benchmark, and work to build the

economy in each region to surpass that of Singapore! Doing

this will make both the Southwest and the Southeast formidable drivers

of national cohesion and development. A concerted effort to transform