Another honour for Andrien Gbinigie 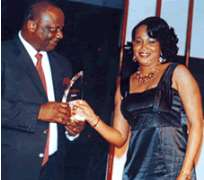 For his invaluable contributions to the growth of entertainment in Nigeria and the African continent, Mr. Andrien Ekhator Gbinigie, the life patron of the Movie Reporters Guild of Nigeria (MORGON), was recently honoured at this year's Global Excellence magazine's Recognition Awards. Gbinigie, who's also the patron of the Association of Movie Producers, Actors and Screen Writers Guilds of Nigeria respectively, was presented with a special recognition award for excellence in entertainment, at the well-attended event.

While receiving the plaque, elated Gbinigie, who was accompanied to the gathering by his amiable wife, thanked the organizers for deeming it fit to honour him.

The Chief Executive Officer of Atlantic Overseas further promised to continue with his good works for Nollywood and the nation's arts and entertainment sectors in general. He also called on all the warring factions in the entertainment industry to sheathe their swords and help
join hands together to move the industry forward for the good of all genuine stakeholders and practitioners. Gbinigie's award was presented to him amid cheers and applause by top actress and producer Bukky Wright.

Other leading Nigerians and corporate entities that were also given awards for their immense contributions to the nation and humanity were: Governors Segun Mimiko and Gbenga Daniel of Ondo and Ogun States respectively, Senator Iyiola Omisore, Prof. Paul Ojeih of Iris Medical Foundation, Jimoh Ibrahim, Lagos State House of Assembly, First Bank, Zenith Bank, Skye Bank and United Bank for Africa, among other recipients.