RETURN OF THE MUSKETEERS 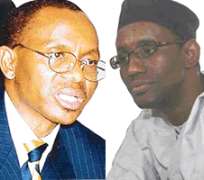 El-Rufai and Ribadu
'One week, one comedy. The land of endless comedy and theatrics'. The above was how Professor Itse Sagay (SAN) once captured Nigeria and events in the country. And in deed, in recent time, there has not been a dull moment in the country as the nation's political and social pendulum keeps swinging to the delight of newshounds.

For erstwhile chairman of the Economic and Financial Crimes Commission (EFCC), Mallam Nuhu Ribadu, and former Minister of the Federal Capital Territory (FCT), Nasir El-Rufai, the popular saying that no condition is permanent is gradually playing out.

Initially, it was a mere rumour, but the matter is already assuming a life of itself and raising tension among the political class and the anti-graft circle. To some people, the return of Ribadu and El-Rufai to the country is bad news and an ill omen that will blow one no good. With their possible return, the country is predictably going to witness some intrigues. Already, the two are rumoured to be considering taking up roles under the current leadership of Goodluck Jonathan. Ribadu, whose EFCC was seen more as a Gestapo organization, is said to be on the queue as Special Assistant to Jonathan on corruption. A similar sensitive job is also in the offing for El-Rufai who visited residents of the FCT with barefaced terror during his days in office.

If the news was just a buzz initially, the alarm bell sounded loud last week when, like a thunderbolt, news hit the airwaves that the then Attorney General of the Federation, Adetokunbo Kayode, (SAN) has withdrawn the case against Ribadu at the Code of Conduct Tribunal (CCT).

Secretary of Yoruba socio-cultural and political organization, Senator Femi Okunrounmu, described as curious the decision of the federal government to drop the charges against Ribadu. One-time deputy speaker of Oyo State House of Assembly, Niyi Akintola (SAN) was also unhappy with the development and accused the government of deception.

Ribadu had been facing trial over allegation of non-declaration of assets while in office as EFCC boss. The Federal Government had alleged that he failed to declare his assets on assumption of office, contrary to Section 15(1) of the CCT Act Cap 56 LFN 1990 as amended, and punishable under Section 23 (2) of the said Act. The gadfly of a police officer however snubbed the tribunal and was always represented by his counsel, Femi Falana, to the chagrin of tribunal members.

But the federal government suddenly did a somersault. Kayode who was represented by his Special Assistant on litigation, Dr. J. O. Olatoke, remarked that application for the withdrawal of the case was due to new findings. He did not explain further.

Ribadu's travails began shortly after the inauguration of President Umaru Yar'Adua, when he removed from the EFCC and sent on compulsory study at the National Institute for Policy and Strategic Studies (NIPSS), Kuru. While attempting to defend government action, the then Inspector General of Police (IGP), Mike Okiro, described the move as a routine exercise designed to improve a promising officer like Ribadu as well as the Nigeria Police. A few months after Ribadu's removal as EFCC boss, he was demoted from the rank of an Assistant Inspector General (AIG) of Police to that of a Deputy Commissioner of Police on grounds that his rapid promotions by the former President, Olusegun Obasanjo, was a breach of Section 153 of the Police Service Commission Act of 2001. This prompted Ribadu to proceed to the court to challenge his demotion, a move that rankled the hierarchy of the Nigeria Police.

The Police maintained that Ribadu, being a serving member of the force, did not have the right under Sections 352 and 357 of the Police Act (2004) to take any legal action against the Police without first seeking the permission of the IG. The then IGP raised a Force Disciplinary Committee (FDC) to 'determine and recommend the punitive measures' to be taken against Ribadu. Ribadu however ignored several invitations to him to appear before the FDC. Thus a few days later, he was summarily dismissed after due approval of the Police Service Commission.

Ribadu was to be enmeshed in another drama on the day of his graduation at NIPSS when, along with his family, he was forcefully evicted from the graduation hall and subsequently arrested. He was later released.

Ribadu not known for bowing to injustice, challenged his dismissal. He mounted spirited legal roadblocks on the path of the federal government in its effort to try him at the Code of Conduct Tribunal (CCT) for allegedly contravening the Act. In a suit filed by his counsel, Falana, named CCT and former AGF, Michael Aondoakaa (SAN) as co-defendants in the suit challenging the powers of CCT to try him. Ribadu prayed the court for an order of perpetual injunction restraining the defendants from trying him under whatever guise. Aondoakaa had filed a notice of preliminary objection, challenging the suit on grounds that the plaintiff's action was 'incompetent.' According to the then AGF, the plaintiff had no locus standi to initiate or sustain the suit.

Aondoakaa also said his objection came because the court lacked the requisite jurisdiction to entertain the suit, describing Ribadu's action as 'frivolous, vexatious and an abuse of judicial process.' The legal brickbats between the government and Ribadu was on for a while until last week when the government decided to apply the brakes and informed the courts that it has lost appetite for the case.

The new AGF said that he has instruction of his boss, which in this case is Jonathan, that the case be discontinued. Kayode's assistant told the CCT that before the dissolution of the cabinet, 'the former Attorney-General of the Federation, Prince Adetokunbo Kayode (SAN), reviewed the cases on ground and directed that this case should be withdrawn.' Olatoke added that, going by the 1999 Constitution, the power to file a nolle prosequi is vested in the AGF and he can discontinue any criminal prosecution at any stage of the case and that it is within the prerogative of AGF under the constitution to decide the cases he wants to prosecute. The acting chairman of the tribunal, Justice Murtala Sani (SAN), advised the prosecuting counsel to formalise his application for withdrawal of the case for proper documentation at its next sitting on Thursday, April 8, 2010.

A similar fate also befell the former Director General of the Bureau of Public Enterprises, (BPE) El-Rufai. The EFCC accused him of not accounting for N32 billion being proceeds from the sale of Federal Government houses in Abuja. EFCC chairman, Farida Waziri, even threatened to extradite him. 'The case of Nasir El-Rufai has been filed in the court and the Commission will soon commence the process of his extradition. Several other high profile matters will soon be filed in court,' he had said.

Political observers viewed Kayode's decision to halt the case against Ribadu as very curious. Senator Okunrounmu, who raised an eyebrow over the development, described it as very curious.

Akintola slammed the government of deceiving Nigerians over the charges it initially raised against Ribadu. 'Are they saying those facts they had then are no more there? I think someone is not telling us the whole truth here and we need to know' he said.

However, human rights activist, Amitolu Shittu, would rather want to look beyond the coming of the two 'Obasanjo boys' to the implication on the political landscape of the country. While welcoming the return of the duo who were members of Obasanjo's kitchen cabinet back to the country, he explained, 'their coming will definitely be bad news to some corrupt politicians. Ribadu for sure will show some people pepper, especially as they are saying that he might be a Special Assistant to Jonathan in the war against corruption.'

Akintola while accepting that the coming of Ribadu might reinvigorate the anti-corruption war in the country, however decried the influence of the former president in the whole issue. 'These are identified Obasanjo boys and from all indications, it shows that it is Obasanjo that is bringing back his boys who are distressed by Yar'Adua. But honestly, all this is a sign that some people are just playing games with us.

'Expectedly, the idea of installing Ribadu as Jonathan's SA on corruption is not going down well with some people around and within the government'. Shittu said the implication of such development is that Ribadu would be strategically positioned to exercise control over the EFCC and ICPC. Conversely, Waziri and the Independent Corrupt Practices Commission chairman, Justice Emmanuel Ayoola (rtd), would be taking instructions from his office. Whether by coincidence, some officials of the EFCC also seem to be uncomfortable over the prospects of Ribadu supervising the commission. The report of an in-house committee that criticized the handling of the sales of seized assets of former inspector General of Police, Tafa Balogun and former Bayelsa governor, DSP Alamieyeseigha under Ribadu was leaked to the press.

The EFCC committee set up by Waziri observed that officers of government statutorily required in execution of the sales of seized assets were deliberately left out during the sales which is against the provisions of the EFCC Establishment Act and Financial Regulations 2520 (2006). The report detailed 'Severe acts of irregularity committed by the Economic and Financial Crimes Commission (EFCC) under its former chairman, Nuhu Ribadu, during the sale of forfeited properties of former Inspector General of Police, Tafa Balogun' and in the sales of assets forfeited to the Federal Government during the investigation of Alamieyeseigha among others.

The leaked EFCC report states that the Attorney-General of the Federation must set the rules of the sales; the Minister of Works must evaluate the assets according to Financial Regulation 2509 (2006) and the Accountant-General of the Federation must survey and value the assets according to Financial Regulation 2510 (2006). The committee's interim report indicated that the appointment of an estate agent by Ribadu did not follow laid-down procedures while the agent was allowed to engage in sharp practices.

The report described the circumstances surrounding the agent's appointment as 'unsavoury especially as the agent was given three outstanding roles to play'. It added that 'they were appointed as valuers, rent collectors and managers of the forfeited property.' The EFCC committee also observed what it says constitutes unlawful practices by the agent, which include getting buyers of forfeited properties to issue cheques in the name of the agents when such cheques should have been made out to the Accountant-General of the Federation as proceeds accruing to the Federal Government of Nigeria.

The committee observed further that the lodgment of proceeds of sales of forfeited assets and forfeited cash in what the Commission calls the Recovery Account is a violation of the EFCC Establishment Act and Extant Financial Regulations. This situation, it says, is further compounded by the habit of failing to promptly cash and appropriately deposit forfeitures made out in cheques and drafts and passed onto the Commission by the agents.

Undoubtedly, the coming of the two former Obasanjo boys promises to rattle not a few in the days to come.