.........says Corporation's plan to move $1.2b from banks to CBN ploy to cover fraud
By ORIH CHIBUIKE, The Nigerian Voice, Abuja 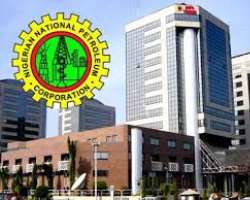 The All Progressives Congress (APC) has reiterated its call on the Federal Government to probe the whereabouts of the dividends paid to the NNPC by the NLNG, as well as the taxes paid to the FIRS Federation Account prior to the latest payment in June 2015.

In a statement issued in Lagos on Wednesday by its National Publicity Secretary Lai Mohammed, the party said the call has become more urgent against the backdrop of published reports that the NNPC has withdrawn $1.2 billion from banks so it could place the money with the Central Bank of Nigeria (CBN).

It said the move by the NNPC is a panic reaction to the expose by the party (APC) that over $4 billion dollars are missing in past dividends paid to the NNPC by the NLNG.

''Whereas NLNG's dividends are paid to NNPC's account with JP Morgan, from where they are supposed to be paid into the Federation Account in accordance with the law, some unscrupulous officials of the corporation have apparently been moving such funds to local banks so they can collect huge commissions on them.

''Now that the cat has been let out of the bag, they have started moving the funds from the banks to the CBN. We believe what we are seeing now is just a tip of the iceberg, hence the need for the authorities to call the NNPC officials to give accounts of the paid NLNG dividends to date,'' APC said.

The party said any delay in calling the officials to account for the dividends may give them enough time to cover their tracks, in addition to the dangers posed to the banks - and by extension the economy - by the sudden withdrawal of such a huge fund from the NNPC accounts with them.

''The top officials of the NNPC and others who met on Monday and decided to withdraw the $1.2 billion from the corporation's account to the CBN must be asked a number of questions, including their motive for the decision and the whereabouts of the commissions paid on such funds,'' it said.

APC insisted that despite the attempt to pull the wool over the eyes of Nigerians, the FG must remain undaunted in unravelling what happened to the dividends as well as previous taxes paid by the NLNG, as part of ongoing efforts to plug all financial leakages, ensure the payment into the Federation Account of all relevant funds and stop the looting of the treasury by unscrupulous public officials who have opted to abuse their office.

''It is not by accident that until the advent of the Buhari Administration that has decided to enthrone transparency in governance, no one has heard anything about NLNG dividends and taxes, while the funds there from have not been shared as they should have been. This is not right.

''A situation in which funds meant for all Nigerians are eaten up by a few will no longer be tolerated. Those who are opposed to the efforts by the Buhari Administration to clear the rot left behind by the past government and restore transparency to the system are enemies of Nigeria,'' the party said.