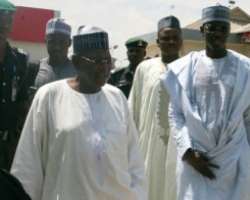 A Federal High Court in Kano has ordered that the former Jigawa State Governor, Alhaji Sule Lamido, and his two sons, Aminu and Mustapha, alongside others be remanded in prison for alleged money laundering and misappropriation of public funds, totaling N1.351bn.

Justice Evelyn Anyadike of the FHC on Thursday ordered that Lamido and his two sons, referred to as second and third defendants respectively, would remain in Kano Prison until September 28.

This means that the trio will complete their Ramadan fast and celebrate the Sallah in the prison.

The ruling followed the 28 counts slammed on the former governor and his sons by the Economic and Financial Crimes Commission bordering on alleged money laundering and misappropriation of funds.

Justice Anyadike had declined a bail application filed by Sule Okoronma, who appeared for the accused persons, noting that they all pleaded not guilty to the 28 counts instituted against them by the EFCC.

Lamido's supporters besieged the court premises, carrying placards, chanting solidarity songs while querying, 'Why Lamido, why Lamido', as prison officials drove the ex-governor alongside his two sons and other five accused persons to an undisclosed prison in a Toyota Hiace marked PS 584 A.

In a related development, Justice Ademola Adeniyi of the Federal High Court sitting in Abuja has granted bail to the former Governor of Imo Stateâ€Ž , Mr. Ikedi Ohakim who is answering to a 3- count money laundering charge, to the tune of N270million.

â€ŽOhakim was arraigned before the high court Thursday by the Economic and Financial Crimes Commission, EFCC, over allegations bothering on money laundering, abuse of office and misappropriation of public funds.

He was alleged to have looted the sum of $2.29m from the Imo state treasury while he was governor and used same to acquire a mansion at the Asokoro District of Abuja.

In a ruling this afternoon, Justice Adeniyi released him on bail on the condition that he must produce a surety who must deposit the sum of N270m.

According to the court, the surety must be an owner of a landed property within the jurisdiction of the high court and must tender the title deed of such property to the Deputy Chief Registrar, DCR, of the court for verification.

In the alternative, Justice Adeniyi held that such surety could depose to an affidavit of means before the â€ŽDCR of the court in charge of litigation.

More so, Ohakim was ordered to surrender his international passport to the court, â€Žpending the hearing and determination of the charge against him.

Specifically, one of the charge against the former governor read: 'That you, Ikedi Ohakim, on or about the month of November, 2008 in Abuja, within the jurisdiction of this Honourable Court made a cash payment of $2,290,000.00(Two Million, Two Hundred and Ninety Thousand Dollars) which was then an equivalent of about N270,000,000.00(Two Hundred and Seventy Million Naira) for the purchase of the property known and described as Plot No. 1098, Cadastral Zone A04, Asokoro District, also known as NO. 60 Kwame Nkrumah Street, Asokoro, Abuja, which amount exceeded the amount authorised for an individual by section 1 of the Money Laundering (prohibition) Act, 2004, and thereby committed an offence contrary to the said section and punishable by section 15(1)(d) of the Money Laundering (Prohibition) Act, 2004.