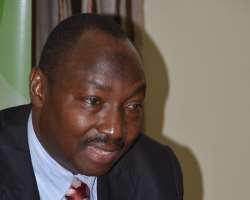 By Group Capt. Edward Gabkwet
“Mentoring is a brain to pick, an ear to listen, and  a push in the right direction.” – John Crosby

In writing this eulogy, I have pondered on the word, 'Mentor' and how it came about. Various resource materials attribute the word to a Greek mythology. According to this myth, Mentor was the name of the son of Alcimus. In his old age, Mentor was a friend of Odysseus, the legendary Greek king of Ithaca. As time went by, Odysseus placed his son, Telemachus, and his palace in the care of Mentor and his foster-brother Eumaeus when he departed for the Trojan War. When Athena, the great Olympian goddess of wise counsel visited Telemachus, she disguised as Mentor to hide herself from the suitors of Telemachus’ mother Penelope, whose husband (Odysseus) was thought to have died in the Trojan War. As Mentor, the goddess encouraged Telemachus to stand up against the suitors and go abroad to find out what had happened to his father. When Odysseus suddenly returned to Ithaca, Athena appeared briefly in the form of Mentor again at Odysseus’ palace. As a result of Mentor’s relationship with Telemachus, and the disguised Athena’s encouragement and practical plans for dealing with personal dilemmas, the name Mentor was adopted in English as a term meaning someone who imparts wisdom to and shares knowledge with a less experienced colleague. In today's modern term, a mentor is a person or friend who guides a less experienced person by building trust and modeling positive behaviors. An effective mentor understands that his or her role is to be dependable, engaged, authentic, and tuned into the needs of the mentee. It is in the above light that I have come to view Air Commodore Yusuf Anas, the immediate past Director of Public Relations and Information(DOPRI) at Headquarters Nigerian Air Force (NAF) and the officer that has come to epitomize PR in the NAF, having served as DOPRI on 2 occasions with a cumulative 7 years in tow.

Since my first encounter with Anas some 19 years ago as a young pilot officer fresh from the prestigious Nigerian Defence Academy, I have come to regard him as my mentor given that it was he who nurtured me and instilled those basic on-the-field PR techniques I needed in performing my duties. I recalled my first interface with Anas then as a Staff Officer DOPRI at the then HQ NAF Annex situated at HQ NAF  Officers' Mess, No 1 Kofo Abayomi Street, Victoria Island, Lagos. Being one of the very few officers to voluntarily opt for PR as a trade in the NAF back then, Anas received me with open arms and made me feel at ease at the Directorate.  He struck me as a refined and humble officer always willing to lend a helping hand to a much younger colleague. It didn't take long for me to realize the calming and infectious effect of his presence in the Directorate, especially during crisis periods. Even the airmen felt at ease with his demeanour. He would always come to the library, the then makeshift office I shared with Late Group Captain Dayo Makun (May His Soul Rest in Peace), to check up on us and find out how we were coping. Even when we fell out of line, Anas was always at hand to sort things out.  As a young officer, I must confess that I was awestruck by Anas' meekness and his attitude towards his subordinates. Clearly, Anas was aware that subordinates buy into the visions of their leaders only when you carry them along and add value to their lives. Hence his good nature knows no bound when relating with both his superiors and subordinates alike. As a young PR officer about to venture into a turf already saturated with civilians, Anas' mentoring played a major role in shaping many of us while preparing us for the challenges that lay ahead. Indeed, this wasn't what one had expected especially when one reminisces about stories being told of subordinates placed under undue pressure with little or no results to show for it at the end.

Aside being a truly eminent man-manager, great educator, a man of vision, integrity, humility, extraordinary leadership and tremendous energy, Air Cdre Anas had a sensitive and warm approach to people and took a personal and keen interest in personnel welfare and career progression.  This he brought to bear on the 2 occasions he served as the DOPRI. During his second tenure, nearly all of the non-trade personnel in the Directorate underwent Basic PR or PR-related training. It must also be said that Anas has a commanding presence, yet was humble, approachable and friendly. Little wonder therefore that even in retirement, his services are still sought after as only recently, to be precise 23 June 2015, Anas was appointed the Executive Secretary of the newly established Centre for Crisis Communication (CCC). A Non-Governmental and independent body, the CCC aims at actively being involved in research works and publications and provides credible and professional crisis communication to the stakeholders and the general public. What makes this appointment unique is the fact that CCC is a brain child of the Forum of Spokespersons of Security and Response Agencies (FOSSRA) whose membership consist of  the spokespersons of the Defence Headquarters (DHQ), Nigerian Army (NA), Nigerian Navy (NN), Nigerian Air Force (NAF), Nigeria Police Force (NPF), Department of State Service (DSS), Nigerian Intelligence Agency (NIA), Nigerian Customs Service (NCS), Office of the National Security Adviser (ONSA), Nigerian Immigration Service (NIS), Nigerian Security and Civil Defence Corps (NSCDC), Nigerian Prison Service (NPS), Economic and Financial Crimes Commission (EFCC), Federal Road Safety Commission (FRSC), Federal Fire Service, and National Emergency Management Agency (NEMA). That Anas, a proud ambassador of the NAF, was considered worthy of leading an organization nurtured by his colleagues while on retirement speaks volume of his rich pedigree. To many, this appointment didn't come as a surprise in view of his vast experience as a PR guru with over 30 years experience on the job. That he will succeed is therefore not in doubt.

Anas attended the Nigerian Defence Academy as a member of 27th Regular Course. He is a recipient of many awards some of which include Best Man of the Year in 2012 by the American Biographical Institute for Outstanding Pursuits and Achievements in Public Relations, Forces Services Star, Meritorious Service Star and Defence Service Star. He is also a member of several national and international professional bodies, some of which include Member, Nigerian Institute of Management (MNIM), Member Nigerian Institute of Public Relations (MNIPR), Member Federation of African Public Relations Association (MIPRA) and Member International Public Relations Association (AFPRA). He recently retired after attaining the rank of Air Commodore.