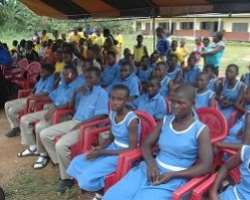 “If the lions don’t tell their own side of the story, then only the hunters will be heard and celebrated.” ~ KENYAN ADAGE

It was Sir Winston Churchill who said, “The empires of the future will be empires of the mind.” The former British Prime Minister made that statement more than 70 years ago. In a prophetic sense, he was speaking futuristically of the knowledge-driven society of the Computer Age. The good news today is that the future empires which are the ‘empires of the mind’ are being built in Bayelsa State. This is possible because the Governor Seriake Dickson Administration has keyed into the vision of Sir. Winston Churchill’s future empires. The priority attention given to human capacity building is a practical demonstration of this fact.

Understandably, education which holds the key to building ‘the empires of the mind,’ is the main focus of the new empire-building in the State. This accounts for why the administration has invested so heavily in the education sector of the state to lay the foundation of ‘the empires of the mind.’ In fact, a fact-backed development assessment in the education sector over the last three years in Bayelsa State, must as a necessity, take into cognizance the vaulting jump the state has made in education matters. Before the Governor Dickson Administration mounted the saddle in February 2012, Bayelsa State was not just among the educationally less developed states (ELDS) in the federation, but it was placed on the lowest rungs of the ladder of educational development. The teaching and learning environment generally was in a state of disarray, occasioned by dilapidated buildings with leaking roofs, broken walls, and in some cases, classrooms without

functional doors and windows.
The schools had no luxury of functional libraries and laboratories, special rooms and theatres for special subjects such as woodwork, electronics,. That was the disheartening scenario that greeted Governor Dickson and his team on assumption of office. Comrade Walton Liverpool, the Executive Secretary of the Bayelsa State Universal Basic Education Board, disclosed that when they came in, the educational system was comatose, begging for urgent revamping. He said in their first SUBEB quality assurance meeting that Bayelsa State came least out of the 36 states in the country. It was not a development to cheer about but pledged to put in his best to revamp it within the limits of human possibilities.

However, dissatisfied with the disconcerting educational statistics of the State, the Governor Seriake Dickson Administration was propelled to quickly declare a State of emergency in the education sector and proclaimed the introduction of free, universal and compulsory education from the primary to secondary level. Governor Henry Seriake Dickson said this much of the sorry state of the school system: “The situation in our public schools in the State is clearly less desirable. The infrastructure was not just there. There has not been proper articulation of the issues over time to see education as a means to development and the need to properly invest in the very important sector.” However, it is heartwarming to report that from the least performing State in basic education out of the 36 states in Nigeria, Bayelsa has now risen remarkably to the tenth (10) position under three years. This feat is phenomenal, to say the least.

The indices used in this metrication are infrastructural development, the momentous input of resources to educational development, provision of teaching and learning materials such as desks, computers, whiteboards and science equipment. Others are free textbooks, school bags, school uniforms and school sandals for pupils and students at the basic level. Under public school infrastructure, the Governor Dickson Administration has built 200 primary schools, 400 residential quarters for head teachers and 27 mega-school projects in the state. Each of the mega schools boasts 12 classrooms, 23 toilets, a multi-purpose hall, an ICT hall, a 75-KVA sound-proof generator, a fully equipped teachers’ research room, an overhead water storage tank serviced with an electric-power-driven borehole system, a library, a laboratory and a store. At the post-primary school level, the administration has also built 40 model secondary schools which cut across all the three

senatorial districts in the State.
The schools are designed to provide boarding services and also have facilities such as refectories, halls of residence (dormitories), ICT workshops, science laboratories, libraries, etc. As a popular saying goes, in vain does a nation build its school infrastructure if the requisite manpower is lacking. This why the administration through the Bayelsa State Universal Basic Education Board has made training and retraining of teachers a top priority, to realize the lofty goal of building a solid manpower base in the state for accelerated development. In that regard, the SUBEB deserves accolades for putting together several workshops and training programmes for the teaching fraternity.

The Bayelsa SUBEB also prudently monitors contractors, school staff supervision, and ensures that school infrastructure is optimally utilized to achieve the goals of quality education, pursuant to the policy of the National Policy on Education. The Board is also ensuring that teacher-student ratio is reduced as much as possible. The thrust of the Board is to ensure that students learn in a conducive environment, with well-equipped facilities such as libraries, laboratories and a highly-motivated teaching staff. The Teachers’ Training Institute at Bulou-Orua had been established for the purpose of providing in-service training to build up the capacity and enhance teachers’ competencies.

The TTI will serve as veritable resource centre and knowledge foundry for intellectual re-armament of both teachers in the public schools and their counterparts in the private sector. Manpower development is the touchstone for enduring progress. This informed the granting of scholarship to no fewer than 250 high-performing students at the secondary level, who are studying in some of the top-of-the-range schools in the country. Similarly, many Bayelsans are pursuing degree programmes up to PhD level in top-rated varsities in Nigeria and abroad. The process of building ‘the empires of the mind’ has led to the establishment of the Isaac Jasper Boro College of Education, the Teachers’ Training Institute, Institute of Tourism and Hotel Management, Bayelsa State Sports Academy, the College of Agricultural Technology, the Football Academy, the School of Music, and the Maritime Academy.

Besides institutionalizing the regular supervision of public schools to maintain acceptable standards in the system and recruiting science and computer graduates as teachers, the administration continues to overwrite public examination fees for students of the state. The idea behind the latter is to reduce the financial burden on parents and guardians whose children and wards didn’t have the opportunity to be part of the State Government’s scholarship programme.

The transformed and dynamic educational environment of Bayelsa State speaks volumes of the unwavering commitment which the present administration has for educational development. The huge investment made on education is not sheer happenstance; it is borne out of the priority accorded education, which is a critical sector of the Restoration Administration.

Now, the Nigerian economic is walking a tight rope and the States are no exception. As can be seen, more than 70% of States cannot meet basic obligations. Even in these harsh times, government has remained faithful to its promise. Clearly, the educational policy is driven by passion and massive commitment. There is no gainsaying that Governor Dickson is carving a niche for himself just as Chief Obafemi Awolowo of the defunct Western Region. The clarion call then is for Bayelsans from every walk of life to close ranks and labour with their resourceful and hardworking Contriman Governor to build ‘the empires of mind’ in the emerging new Bayelsa State through the instrument of education.