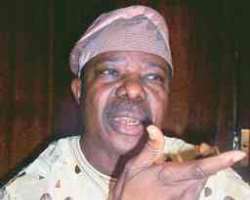 King Sunny Ade
While a lot of people would expect King Sunny Ade to have retired, the exponent of Juju music is still waxing strong. It is no longer news that KSA, as he is popularly called, is one Nigerian singer that has recorded many 'firsts' in his music career. Forexample, he was the first Nigerian to win the KORA Music Awards and the first African to be nominated twice for the American Grammy Award.

Although he has not won a grammy yet, King Sunny Ade has contributed a lot to the growth of the Nigerian music industry. Not too long ago, alongside other international stars, he was invited to record a song for the 2010 World Cup, which will take place in South Africa in June.

In a chat with Saturday Punch, the Ondo State born musician said he was humbled by the invitation. Explaining how he became a part of the recording, he said, 'According to my manager, a letter was sent to me. Two weeks to the time of the recording, they sent us a track. They said we should sing in our language. According to the producer, who happened to be the sound engineer, he said Stevie Wonder was the one that told them to call me if they were looking for a musician from Africa.'

And that was how he went to Beverly Hills in the US to record the song. To him, the experience is not one that he would forget in a hurry.

'We recorded the album in Capital Records. We did a video along with it on the roof of Capital Records. We stayed in Beverly Hills. We came to Hollywood everyday to record. It was a wonderful experience. It is an English song but we were asked to sing it in our local languages. I did mine in Yoruba but they want me to do it again in different Nigerian languages, including Hausa and Igbo, so that people will be able to sing it,' he said.

Still recalling how the recording went, KSA said, 'The video recording was awesome. Some of the cameramen were in the helicopter and recording us from there. We were just dancing. It is an experience that I will not forget. The whole place was so cold. You can imagine how cold I should be in my lace material that has plenty holes and I was on the roof top. But we were so happy. We were jumping up and down.'

Sunny Ade did not disclose how much he was paid for taking part in the recording. Instead, he said that he could have done it for free, given the chance.

'They flew with artistes from India, China, France, Nigeria and Algeria. The Algerian represented the Arabs. I am the only one from Africa. We were about seven artistes from different continents. It is an added feather to my cap. It is not a matter of money. It has to do with my career. I want to be a part of it. They brought me down there. They paid for my tickets, hotel and even feeding. I was just a participant in that glory. Whatever they paid me, taking one person out of 100 million people in Nigeria and even in Africa as a whole, if they had asked me to sponsor myself, I would have gladly done that,' he said.

But as much as he was excited about the trip, a tragic incident had made him quite unhappy. Recently, two members of his band died in a car accident and their deaths had brought him so much sadness.

He told our correspondent that the incident occurred while the victims were on their way to a show at Ereuwa in Oyo State.'Both of them lived in Ibadan and they had to go for the show with public transport. Unfortunately, they had an accident. I learnt theat everybody in the car died. In my band, we are more than 52. I have been carrying them along for over 40 years and nothing like that has ever happened. You should know how shocking it was when I received the news.

'Those who informed me on the phone didn't know how to break the sad news. They asked me where I was and I told them we were on our way to the show. They said they had a little problem and they were sorting it out. They told me that two members were travelling to Ereuwa and one died in an accident. I was completely blanked out. Later, they said it was not one person but two people. You will not even want your enemy to die. You would want your enemy to live and see how well God has blessed you, let alone somebody that has been with you for a long time. Their death was a big loss to me,' he said.

Still talking about his music, KSA just recorded a new album titled, 'Morning Joy'. One of the songs is dedicated to the Globacom boss, Mike Adenuga Junior.

In the song, KSA praised the business mogul so much that Saturday Punch had to ask how much he got from Adenuga to compose the song. In response, he said, 'Do you want to share it with me? But seriously speaking, who doesn't love Adenuga in Nigeria? He turned the anger of the people to a joyful one. In those days, before you could buy a sim card, you would sweat. He was the one that reduced the tariff. I am not the only one that has recorded a song for him. Before me, Ebenezer Obey recorded a song for him. Many musicians have been doing that. Apart from that, I am a Glo Ambassador. To do a recording for him is not a big deal. He didn't even know anything about the song.'