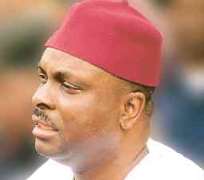 The Economic and Financial Crimes Commission has stormed two big banks and quizzed some top officials of the Delta State Government in its bid to establish the veracity of a petition filed against former Governor James Ibori. The anti-graft agency has also launched a fresh manhunt for the former Governor with its operatives now trailing him for arrest.

Ibori is wanted to make a new statement following the fresh petition sent to the EFCC by the Delta State Leaders, Elders and Stakeholders Forum.

In the petition submitted by the DSLEF, led by Chief Edwin Clark, the Forum alleged that Ibori used 800 units of shares owned by the Delta State Government in Oceanic Bank Plc to secure N44bn private loan from Intercontinental Bank Plc during his tenure as governor between 1999 and 2007.

Saturday Punch investigation revealed that EFCC operatives had obtained a statement from Clark in his Abuja residence, during which the former Information Minister shed light on the petition, while forensic auditors had examined the books of the Delta State Government and the two banks in continuation of their investigations.

It was gathered that detectives from the anti-graft agency had visited Asaba, the state capital and took hold of documents relating to the shares and loan transactions from relevant top officials of the government and the banks in a bid to establish the veracity of the claim in the petition written by the DSLEF.

The DSLEF had in the petition to the EFCC alleged that Ibori deployed the 800m units of shares in the acquisition of an American oil services company, Ascot Oil, which currently has its headquarters in Port Harcourt, Rivers State.

The group further alleged that 520m out of the controversial 800m units were sold in questionable circumstance.

Consequently, Chairman of the anti-graft agency, Mrs. Farida Waziri, deployed detectives to question the managements of the two banks to establish their connivance or otherwise in the alleged scam.

A reliable source in the EFCC revealed that Waziri mandated the detectives to thoroughly examine the records of the state government and the two banks this time around, since it was believed that their officials did not cooperate with the agency in its earlier move to prosecute Ibori for alleged money laundering offences.

The source also added that the fresh manhunt for Ibori was to enable him respond in writing to the petition by the Delta Elders Forum.

It was, however, gathered that it had not been possible for the detectives to track down Ibori for interrogation on the matter.

'Our detectives also interrogated the managements of Oceanic and Intercontinental banks to afford them the opportunity to defend their action in the financial scam alleged by the elders of Delta State. The Delta leaders had claimed that 800 million units of shares owned by Delta State Government in Oceanic Bank were tampered with in order to secure a private loan of N44bn from Intercontinental Bank.

'The Delta elders further stated in the petition that the shares were not only mortgaged, but that about 520m out of the 800m shares had been sold in yet uncertain circumstance. The EFCC cannot come into conclusion until our detectives secure the statement of the major players in the deal.

'Our detectives have also launched a manhunt for the former Governor James Ibori because it is quite natural that they must talk to him to enable him to confirm or deny the allegation contained in the petition. The allegations are grievous, and that is why we are looking for ex-governor Ibori to come and give his own side of the story. But sadly, the former governor has failed to make himself available to the detectives.'

Speaking with our correspondent on Thursday, Clark confirmed that operatives of the anti-graft agency had obtained his statement on the petition against Ibori. But he declined further comment.

'Some men from the EFCC have visited my house in Abuja and we exchanged information on the petition we wrote to the commission on the financial malpractices perpetuated by Ibori in the administration of the state, but I don't want to speak further on the matter,' Clark said on the telephone.

Ibori could not be reached for comment at press time.

Asked to confirm whether officials of Delta State Civil Service were quizzed by the EFCC, the Commissioner for Information, Delta State, Mr. Oma Djebah, said he could not speak on a matter concerning the former governor of the state. 'I only speak for the present government,' he said.

EFCC's spokesman, Mr. Femi Babafemi, in an SMS message sent to Saturday Punch in response to the enquiry on the extent of investigation into the latest investigation against Ibori, said the investigation was ongoing.

'The investigation is ongoing. Any further information is capable of jeopardising the process, please,' Babafemi said.