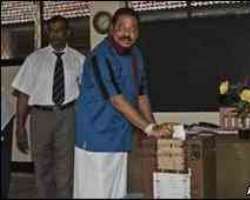 The governing coalition in Sri Lanka has won a majority in parliamentary elections, according to preliminary figures released by election officials.

The main opposition party has won 46 seats, making it unlikely the alliance will win the two-thirds majority needed to make constitutional changes.

It is the first parliamentary poll since the civil war ended last year.