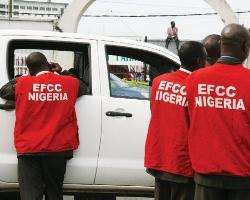 Amidst the bazaar of arraignments and arrest by the Waziri-led Economic and Financial Crimes Commission [EFFC] and its host of fledgling detractors, a new turn in events threatens to dislodge the independence enjoyed by the EFCC. This is as the Senate recently proposed a monitoring body to oversee the activities of the EFCC. Of which the EFCC and its officials have labeled 'rubbish'.


Indicators show the citizenry of Nigeria and Abuja appear perturbed by the resistance exhibited by the Chairperson of EFCC over the new development. For this reason, Ukpakareports.com took an incisive look into the EFCC and allegations of mishandling of petitions in return for probable financial gains. Particularly, allegation of Sex for Bail against the EFCC was examined.


Ukpakareports.com has in its possession documents and petitions previously sent to the EFCC – of which allegations of fake travel visa issuance by an alleged business fraudster operating out of Central Area District in Abuja, is contained. As gathered, the owner [Bosede] of the company [Alliance Air Services Nigeria Limited] located at 252 Herbert Macaulay Way who resides in the Kubwa area of Abuja – is alleged to receive money in return for visas [fake] to travel to Dubai, Arab Emirates.


On one of the transactions brought to the notice of the EFCC, Bosede received money from a Mr. Adam Akulieaku Daniels for the services of obtaining a travel visa to Dubai. But the travel visa turned out a fake. Bosede, when alerted of the forgery, refused refund of Adam's money for the travel visa while boasting that “there is nothing the police can do. I am well connected”.


Upon further investigation, it was found that Bosede had not only issued fake visas to Mr. Adams. Mr. Adams was one of many that had been swindled of their money. Mr. Adams through the assistance of his counsel petitioned the EFCC in mid-2009 over the document forgery. And the morning following the petition, which was personally received by the Head of Operations [Otitoju], Bosede was arrested at her place of business by agents of EFCC headed by Mr. Farouk. On the same morning, Mr. Adams also was invited to make statements at the EFCC office in Abuja. In Bosede statement to the EFCC, she confessed of having issued forged visas to her customers – in numbers yet to be quantified financially by the EFCC. Bosede was given what EFCC termed an administrative bail and released hours after her arrest.


Immediately following Bosede's release, Ukpakareports.com learnt Bosede and the EFCC agent in-charge of the case was sighted at the Nugget Hotel in Utako District of Abuja – sharing alcoholic beverages at the dimly lighted bar lounge before relocating to a room in the hotel's 2nd floor. The source implied both persons had a sex romp.


The cry of foul-play rings as the victim awaits the conclusion of the EFCC investigation that has lasted over 7 months. In talking with the lead investigator, Mr. Farouk, he confirmed to Ukpakareports.com that he was aware of the case and confirmed that he was the agent assigned to the case. He said the case is still being investigated – that he had requested for the passport and receipt of purchase. He noted that once the passport is turned in – that the investigation will be complete. But in talking with the counsel to Mr. Adam, he disagreed. He told our correspondent that he “spoke with Farouk last week” and that “he has the documents in question. He never asked for the passport. The statement is clear. It's in their file.”


The spokesperson for the EFCC told our correspondent that the allegation on the EFCC is baseless …that “it smells like blackmail by Barrister Osuagwu” while questioning “why the Barrister failed to report Mr. Farouk to the authorities.”


It is not certain the agent demanded or received sex from Bosede in exchange for bail or altered investigation however the length of investigation period posses a query. To ardent students of current affairs, it is not surprising. Experts cognizant of the running of the EFCC, point to the recent intake of investigating agents via Farida Waziri instructions as partly responsible for the administrative abuses allegedly gripping the EFCC. Mr. Farouk was among the new intakes hired by Farida Waziri – following the exit of Tunde Ogunsakin.


The hope of many Nigerians are that both Farida Waziri and the Senate will address the maladies taking root within the EFCC.