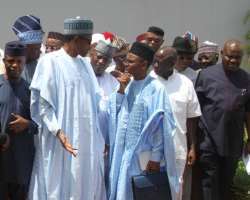 The three tiers of government, yesterday, shared a total sum of N 409.354 billion for the month of May.

This is made up of N324.061billion from statutory allocation, N56.04 billion from Value Added Tax, VAT, N6.330 billion as refund by the Nigeria National Petroleum Corporation, NNPC, to Federal Government, as well as the N31.240 billion exchange gain.

The amount represents N30.113 billion increase from the N388.339 billion shared in the month of April

A break-down of the distributions showed that the Federal Government got N151.805 billion from statutory allocation, which represents 52.68 per cent, while states and local governments received N76.998 billion and N59.362 billion respectively, representing 26.72 per cent and 20.60 per cent.

On the other hand, the oil producing states shared N29.071 billion as the 13 per cent derivation against 23.109 billion shared in the previous month.

Briefing journalists at the end of the Federal Accounts Allocation Committee, FAAC, meeting, the Permanent Secretary in the Ministry of Finance, Mrs. Anastasia Nwaobia disclosed that the gross revenue of N324.061 billion received for the month was higher than the N282.062 billion received in April by N41.999 billion, due to the improvement from the refund to Federal and the exchange gain added to the revenue.

Nwaobia said Federal Government has taken steps to block all the identified leakages in the system and hoped that the source of revenue to government will continue to improve in coming months.

Under the excess crude account, ECA, she explained that the reserve stood at $2.78 billion dollars as at yesterday, from which they had the refund of N6.360 billion.

Commenting on the $1.18 billion dollar missing from the NNPC forensic audit report, she said the 'matter is being considered and when decision is taken, information will be made public on it.'

On why they could not hold FAAC meeting, last week, the permanent secretary said the meeting could not hold due to some reasons, some of which was that the minister and commissioners were no longer there and that the Accountant General of the Federation exited office on June 12.