Shocking Confessions From The Sakawa 'king' 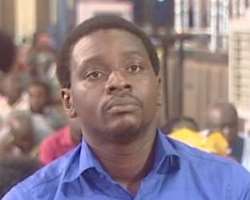 A Nigerian internet fraudster known as the ‘king of dating’ for his sophisticated tactics of online manipulation has given an eye-opening confession at a Lagos-based church.

Samuel Johnson, an Edo State indigene, explained that his journey into advanced internet scamming began in The University of Port Harcourt after he joined the ‘Black-Axe’ cult.

“I followed them into a very thick forest during the night of initiation,” the young man narrated. He was just 19 years old at the time. “We reached a place where there was a candle and a coffin encircled by 50 young men. They tortured us with canes until we started bleeding. They then cut my tongue on a razor blade and gave me something to drink.”

The quiet, intelligent student changed drastically from that day onward. “It was like I had two people living inside me,” he recalled. “I became very aggressive. I had this strength to want to steal and started stealing from people. I also started smoking and drinking excessively. Anytime I drank, it’s like I became stronger.”

A cult friend into online fraud, soon egged him into joining. However, for Samuel, there was a strange, spiritual element to his deceptive tricks, widely known in Ghana as 'sakawa'.“There was a spirit inside me that kept teaching me. I was not just any fraudster; I learned it from meditating on it. It was inbuilt. Even if I walked into a room and money was kept there, I would know where to find it.”

Starting by procuring foreign sim-cards from UK and USA so as to deceive potential victims, Samuel specifically targeted wealthy foreign ladies in North America. “I had pictures and pre-recorded videos of a white man. There is software which will replay these videos on Skype. So, if I am Skyping with you, you will not see my present self – you would see this video on a webcam. I had about 20 different videos with the same white man and I had created stories behind each clip. When I showed my victims, they all believed it was real.”


Johnson explained Facebook was the easiest way to attract prospective ‘customers’ and he had fixed a fake profile using the same pictures in the doctored videos he owned. “I would tell them I was an engineer who worked and lived in London, that I am rich and wealthy. I wouldn’t tell them I’m not rich; it was the money I used to drag them towards me.”

Johnson explained how he used his boast of huge wealth to lull victims into a false sense of security. “Sometimes I would ask them to help me look for a property agent to buy a house. I would tell them I am ready to pay for the house as soon as I come. I would send them a fake e-ticket and tell them I would be arriving in two weeks. I even had a pre-recorded video of a 12 year old girl who I pretended was my daughter. I had this assistant who would help me in speaking like a small girl. There is no way you would see that video on Skype and not believe it is real. They buy into it immediately. That was how I was able to draw them to get money from them.”


To gain added confidence, Samuel would ensure an emotional attachment was fostered. “You make it look real. I would send them gifts – rings, champagne, credit cards to shop. We would have ‘phone sex’ to draw their attention even more – that is how they believed. Sometimes, I could be talking to 10 different women simultaneously and I never forgot their names.”

Once such naïve trust was established, extorting money was relatively easy, the former fraudster explained. “I would tell them to contact my bank. Once they give me their details, I would make a fake wire transfer. They would see the money moving into their account. When it stops, I would tell them that they have to contact the bank and pay the ‘cost of transfer’.”

The expert duper would even go to the extent of getting personal bank details of his foreign victims, and then call their bank pretending to be an owner of the account, change information and request for a huge loan.

Money flowed freely. “I could make $30,000, $80,000 - even $250,000 on a single victim. I was living in very luxurious and expensive hotels. I moved to Omole Phase One, Ikeja and lived in an apartment for which I paid N1.5m every year. I bought all my properties in one day. I was lavishing it. I would buy Hennessy every day. I had to drink. The thing is – I needed to alcohol in order for me to perform,” he recounted.

Johnson explained that his preferred victims were those who were high-ranking, intelligent professionals. “We preferred people who were educated – people that would say, ‘It is not possible for me to be scammed’. I attacked lawyers through Yellow Pages in USA. I would tell the lawyer that someone owes me money from Michigan and the person is living in Alaska. The person the lawyer would contact in Alaska would be me also. Once he talked to this ‘person’, I would say, ‘I really owe him money and I want to pay back $300,000’. I would send the lawyer a cheque and once I sent it, they would not find out from the bank if the cheque was real; they would just deposit it.”

Johnson gained such a reputation for his scamming tricks that he began teaching others, even foreigners. “I had many boys that I was training. They called me the ‘king of dating’ because I always got what I wanted. Sometimes I would be invited to Benin or Lagos to teach fraud. I even trained grown men who were 40 to 45 years old. Some were not even black or Nigerian; some where white. They called themselves diplomats but carried fake money.”

With the words, ‘Money; power; respect’ tattooed on Samuels’ arm, it served as a constant reminder of his mission. “That was the law I lived under,” he explained.“Sometimes, if I had emotions towards the people I was defrauding, this tattoo would remind me of why I entered this business in the first place. I would say there was no mercy.”

Samuel said he had lost count of the people he had deceptively stolen money from online. “I derived pleasure in doing it. It made me feel strong – that I could make people do what I wanted them to do. I did not do this alone. I had bankers as friends who helped me out. In fact, the money I tipped them with would be more than their salary for the whole year.”

However, despite the flamboyance and lavish lifestyle, Samuel said his life was bereft of joy and the money was merely fleeting. “Whenever I got this money, it was like chaff before the wind – it would blow away. I never enjoyed it for one day. I would always fight and beat any girl I was dating. There was such anger, like there was someone living inside me. My life was upside down. I would always fear that I would be involved in an accident. If I was crossing the road, even if there was no car coming, I would run. I was living in isolation. I never came out during the day. Everything was troubling me. I never had peace. My heart was beating fast. I behaved like someone was chasing me whereas no one was chasing me.”

When a close friend and fellow fraudster was shot dead point-blank at the tender age of 23, Samuel was rudely jolted back to reality. His life was a mess. His dreams were dominated by violent attacks and sexual encounters. He needed help. When an evangelist came knocking at his door, Samuel knew it was the voice of God speaking – he needed Divine intervention to start afresh.

That night, Samuel had an unusual dream. A pastor he had only seen on a few occasions on television came with a message. “I saw TB Joshua in my dream. He told me to fast for three days,” he stated. Complying with the instruction in the Heavenly visitation, Samuel began nursing the desire to visit Joshua’s church in Lagos, The Synagogue, Church Of All Nations (SCOAN).

It was on the ‘prayer line’ at The SCOAN that Samuel experienced what he termed ‘deliverance’. “When the man of God touched me, I immediately saw myself facing a judge. I felt something in between my chest starting to pop out. I then felt like something left me and before I knew it, I saw myself on the floor.”

After the prayer, Samuel testified that he has stopped smoking, drinking and has comipletely stopped his fraudulent activities. His advice is short but concise. “The only way you can achieve greatness is when you have Christ in your heart. Always watch and pray. Don’t just click on any link. Don’t just share your information with anyone. If they send you an email, saying they need your information to change something – don’t listen to them. Depend only on God.”