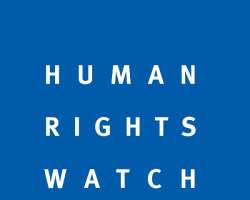 GENEVA, Switzerland, June 15, 2015/African Press Organization (APO)/ -- Congolese authorities should immediately and unconditionally release two activists who were arrested three months ago, on March 15, 2015, during a pro-democracy youth workshop in the Democratic Republic of Congo, a coalition of 14 international and 220 Congolese rights organizations said today. Fred Bauma and Yves Makwambala were arrested at a workshop organized to launch “Filimbi,” a platform to encourage Congolese youth to peacefully and responsibly perform their civic duties.

The government should also release and drop any charges against other activists, opposition party members, and others detained solely for their political views or for participating in peaceful activities.

“Congolese authorities should stop violating basic freedom of expression and assembly rights that are protected under Congo's constitution and international human rights law,” said Ida Sawyer, senior Africa researcher at Human Rights Watch. “Filimbi and others should be allowed to hold workshops on the democratic process without fear of arrest.”

A parliamentary “information mission,” established on March 27 to examine how Congo's security services managed the Filimbi dossier, found no evidence indicating that the Filimbi leaders and workshop participants were involved in or planning any terrorist or other violent crimes, says its report, of which the organizations obtained a copy. Following a debate about the report during closed sessions of parliament on June 12 and 13, Congo's National Assembly recommended a “political solution” that would allow for the release of the two activists still in detention, according to members of parliament who attended the debate.

On March 15, Congo's National Intelligence Agency (Agence Nationale de Renseignements, ANR) arrested about 30 pro-democracy activists and others at a Filimbi workshop in Kinshasa, the Congolese capital, including Senegalese and Burkinabe activists, a United States diplomat, foreign and Congolese journalists, and Congolese activists, musicians, artists, and logisticians. Another Filimbi activist was arrested on March 16. Others associated with Filimbi, including a graphic artist who designed the Filimbi logo and Rawbank employees who managed the Filimbi bank account, were also later arrested by the ANR.

The authorities released most of the detainees in the first week, but two remain in detention: Fred Bauma, member of a Goma-based movement, The Struggle for Change (La Lutte pour le Changement, LUCHA), and Yves Makwambala, a webmaster and graphic artist.

After being held for over 40 days by the ANR without charge or access to legal assistance and without being brought before competent judicial authorities, Makwambala and Bauma were transferred to the public prosecutor's office on April 24 and May 4, respectively. They are now at Kinshasa's central prison.

Makwambala and Bauma, as well as four Filimbi leaders who have not been arrested, were charged with belonging to an association formed for the purpose of attacking people and property, forming a conspiracy against the head of state, and attempting to either destroy or change the “constitutional regime” or incite people to take up arms against state authority. The authorities have also charged Bauma with disturbing the peace, and Makwambala with publicly offending the head of state. These charges appear to be politically motivated, the organizations said.

During a news conference on March 18, Communications Minister Lambert Mende said that the Filimbi leaders were planning “terrorist activities” and a “violent insurrection.”

Judicial officials have told human rights activists in private that there is no evidence to back up the charges, but that the charges were part of a dossier handed to them by intelligence officials.

“Congolese authorities have held Fred Bauma and Yves Makwambala for months without any credible basis,” Jean-Claude Katende, national president of the African Association for the Defense of Human Rights (ASADHO) in Congo, said. “Both should be immediately and unconditionally released and all charges against them dropped. Congolese judicial authorities should assert their independence and ensure the protection of rights recognized by the Constitution, Congolese laws, and the international human rights treaties ratified by Congo.”

The parliamentary report that found no evidence of plans for terrorist activities or violent crimes by Filimbi leaders and workshop participants did not address alleged illegal actions by Congo's intelligence services in holding the detainees without charge for more than 48 hours, denying them access to legal assistance, or bringing them before a competent judicial authority, all rights guaranteed by Congo's constitution.

Intelligence officials confiscated the passports and other materials from some of those who were arrested after the Filimbi workshop and later released and required them to report to the intelligence agency every 48 hours. Others who participated in the workshop, but were not arrested, have been living in hiding fearing arrest. In some cases, the authorities searched their homes illegally or they lost their jobs while in hiding.

In Goma, in eastern Congo, in March and April, the authorities arrested and later released at least 15 activists from the LUCHA youth movement who were demonstrating peacefully to demand the release of their colleagues detained in Kinshasa. Some alleged that they were beaten or tortured through a form of near-drowning by intelligence agents and police who arrested them. Four were granted provisional release but face charges of inciting disobedience to public authority.

The Congolese government should thoroughly and transparently investigate and bring to justice officials suspected to be responsible for violating the rights of the Filimbi workshop participants and LUCHA activists, the groups said.

The arrests of the Filimbi members and of activists who held protests to support them came in the context of a broader crackdown on political party leaders, activists, and others who have peacefully protested attempts to allow Congo's President Joseph Kabila to stay in power past his constitutionally mandated two-term limit, which ends in late 2016.

Congolese authorities should also release other activists and political party leaders who have been detained because of their peaceful political views or participation in non-violent demonstrations or other activities, the rights organizations said. The human rights defender Christopher Ngoyi and political party leaders Cyrille Dowe, Jean-Claude Muyambo, Jean-Bertrand Ewanga, Ernest Kyaviro, and Vano Kalembe Kiboko have all been detained for over four months, in some cases without charge and without access to their families or lawyers, for what appear to be politically motivated reasons.

“Congolese authorities – and especially the intelligence services – have carried out unlawful arrests to silence dissent and clamp down on human rights in the lead-up to the 2016 elections,” said Sarah Jackson, Amnesty International's Deputy Regional Director for East Africa, the Horn, and the Great Lakes. “They should take urgent steps to end the clampdown and to ensure respect for freedom of expression and peaceful assembly.”