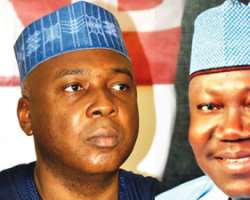 The All Progressives Congress (APC) on Tuesday kicked against the emergence of Bukola Saraki and Yakubu Dogara as the President of the Senate and Speaker of the House of Representatives respectively.

Saraki, a former Kwara State governor and Chairman of the Nigeria Governors' Forum, emerged unopposed shortly after the Clerk of the National Assembly,   Salisu Maikasuwa,   proclaimed   the eighth Senate   into existence.

Dogara   defeated the   former Minority Leader of the House, Femi Gbajabiamila, in a keenly contested poll.

The APC had last Saturday conducted   mock elections in which Ahmed Lawan emerged as its sole candidate for the Senate Presidency. George Akume was to run as his deputy.

While Gbajabiamila emerged victorious in the mock poll for the House, Mohammed Mungono was to run as the deputy speaker.

After the Saturday exercise, the APC leadership directed all its lawmakers interested in the positions to toe the party's line.

But Saraki, Dogara and Ali Ndume , with the backing of their supporters, defied the directive by vying for the posts on Tuesday.

But the victory of two men was described as unacceptable by the APC. It said in a statement by its Publicity Secretary, Lai Mohammed, that   the actions of the new National Assembly leaders and their supporters amounted to treachery and disloyalty.

According to the APC,   the inauguration and the process which led to the emergence of Saraki and Dogara represented the highest level of indiscipline.

The party therefore threatened to sanction the two men and their supporters in order   to clearly show its determination 'to enforce party discipline and supremacy.'

The statement read in part, 'Senator Saraki and   Dogara are not the candidates of the APC and a majority of its National Assembly members-elect for the positions of Senate President and House Speaker.

'All National Assembly members-elect who emerged on the platform of the party are bound by that decision.

'The party is supreme and its interest is superior to that of its individual members.'

The   APC said its leadership was meeting to reestablish discipline   and to mete out the necessary sanctions to all those involved in the 'monumental act of indiscipline and betrayal to subject the party to ridicule and create obstacles for the new administration.'

The party also decried what it described as a situation in which some people, based on nothing but 'inordinate ambition and lack of discipline and loyalty, will enter into an unholy alliance with the very same people whom the party and indeed the entire country worked hard to replace and sell out the hard won victory of the party.'

Urging all its 'loyal senators-elect' to report to the Senate to be sworn in, it vowed to use all constitutional and legal means to resolve the issue.

But President Muhammadu   Buhari later issued a statement in which he said he stood by his earlier position that he would work with whoever the lawmakers elected as their leaders.