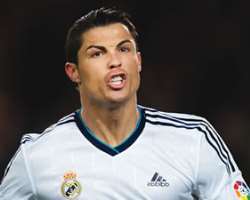 Dolores Aveiro, the mother of Real Madrid star Cristiano Ronaldo, was stopped at Madrid's Barajas Airport last month and caught carrying an illegally large amount of cash as she prepared to fly out of the country, the newspaper El Mundoreported.

According to The Telegraph, 60-year-old Aveiro, who spends long periods of time with her multimillionaire footballer son in his luxury mansion outside Madrid, was held by border police at Barajas after it was found that she had â‚¬55,000 (£40,000) in her hand luggage. Rules against money laundering state that the maximum travellers are permitted to take out of Spain without declaring the transfer is â‚¬10,000.

Aveiro had not filled out a declaration form and, according to the Spanish daily, was held by civil guard agents at the airport for a few minutes while the excess amount of cash was confiscated. She was then allowed to fly to Portugal with â‚¬10,000 in her handbag.

Aveiro will now be fined at least â‚¬600 for the attempt to illegally export cash. By paying the fine, she will be able to collect the confiscated â‚¬45,000.

The celebrity pages in Spanish newspapers have in the past week been showing photographs of Ronaldo relaxing on board a yacht owned by British retail tycoon Sir Philip Green. Having recently separated from the Russian model Irina Shayk, Ronaldo has chosen to start his summer holidays in the company of friends such as Miguel Paixao, an old comrade from Sporting Lisbon's junior ranks.

According to Portuguese newspaper Correio de ManhÃ£, Ronaldo and Shayk's relationship was damaged beyond repair last Christmas when they rowed over the player's mother.

The couple were holidaying in Dubai, but the footballer wanted to travel to his home island of Madeira to surprise Aveiro on her 60th birthday on 31 December. Agency report