Prove Yourself Different Through Effective And Qualitylegislation, Incoming Governor Of Abia State Dr.alex Otti Charge Abia Statehouse Of Assembly Members Elected Under The Platform Of All Progressive Grandalliance (apga)

By SAVE ABIA NOW (SAN) 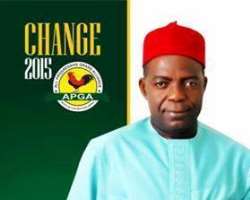 Members of the Abia State House of Assembly Elected under the Platform of All progressive Grand Alliance (APGA) has been to charge to be committed and prove themselves different in discharging their legislative duties as the 5th House of Assembly Commence in the 7th Republic.

This Charge was made by His Excellency The incoming Governor of the State Dr.Alex Otti (OFR) during a two day retreat for Legislators Elected under the all progressive Grand Alliance (APGA) in Lagos

This Retreat was necessitated by the expectations of Abians from the Legislators to ensure effective and Quality Legislation over board due to the abysmal failure of immediate past Administration as a result of weak oversights on the Executive by the legislators.

His Excellency charge the Lawmakers and other chieftains and Party faithful’s to be steadfast and committed to the struggle as the party has approached the tribunal to retrieve the stolen mandate. He assured the members Elect that he is optimistic that among them will emerge the Leadership of the House, He commended the members for being steadfast and committed to the course and hopefully the will of Abians will soon prevail especially now that the incoming Administration is committed to uphold the ethics of the judiciary profession and Social Justice.

He pointed out that the reason for the training is to equip the APGA elected legislators and build their Capacity on strategy of engagement which is parts of efforts being undertaken by the party to ensure that the legislators hit the ground running for quality legislation, Oversights and for the overall benefits of Abians who voted massively for the party.

He assured the Legislators that Experienced Resources persons drawn from various Sectors of Soico-Economic lives will make presentation ranging from Code of Conduct for legislators, mode of, the State Bye laws, Legislation, House Rules and ethics of the legislative profession, House of Assembly Rules, the constitution framework and individual Development tips that will help the legislators in discharging the duties and effective communication with their constituencies.

One of the Facilitator Mrs Mary Ikoku deals with effective leadership Communication thus "Communication is critical to the success of every legislator, without it, you cannot lead effectively. Legislators must communicate, communicate with their constituencies and share information on the Government Policies to ensure the message gets to the Grassroots.

The participant observed the following issues underpinning Development in the state which includes the following;

1. Absence of Effective House of Assembly Members and Oversight on the Executive.

2. over bearing influence of the Executive on every strata of Abia State Socio-Economics Lives

5. Non Implementation of budgetary Allocations and lack of Community participation in Budget Formulation.

6. Non Conduct of Local Government Elections and Use of Transition Committee in the System.

7. Lack of synergy and cohesion between the Executive, Legislative and the judiciary arms of Government in the State.

8. Lack of effective channels of Policy Formulation and implementation

9. Lack of sustainable environment for entrepreneur development and Foreign Investment

10. Use of state apparatus to abuse and infringe on the citizens fundamental Rights and Gross Abuse of Office.

13. Executive influence on the Media Houses in the state

16. Inadequate channels of communication between the Government and the People.

17. Muscling of the oppositions and disdain for Civil society organizations

18. No Clear cut programme of Governance.
19. Executive financial recklessness
Following the Failures of Governance in the State. These issues were identified as underlying factors the House of Assembly are lacking;

1. Oversight on the Executive by the Legislators
2. Lack of capacity to engage their constituencies.

3. Lack of proper Education and requisite skills for legislation.

4. Lack of integrity, Core Value and discipline among the members.

5. Absence of clear cut vision and strategic planning for legislation

10. Issues of Conflict of interest
Haven identify these issues and challenges hindering Developments in the State and ineffectiveness of the State House of Assembly the Forum Recommended the following;

1. There is the need for continuous Capacity Building and training for Abia Elected APGA Legislators

3. Full independence of the Assembly in Oversights and Legislation.(APGA Law makers)

4. There is need for Strategic interface with the Media. (APGA law Makers)

5. Have requisite Basic Legislative Skills and Rules of the House.(APGA Law makers)

6. Champion the campaign of Change through Good Legislation.(APGA Law Makers)

7. Sustain the monitoring and Evaluation of all ministries, Agencies and Parastals of Government to Drive Developments to the Grassroots. (APGA Law makers)

8. The APGA Legislators should leverage on each individual capacity to be ahead of others in the House.

9. The APGA Legislators should divorce politics from Legislation and rise above partisanship to responsive legislation that will promote sustainable democracy.

10. The APGA Lawmakers should build Synergy with Civil society organization and Pressure Groups on Legislative Advocacy and for Attention on issues of public importance.

11. The APGA Makers should ensure that the Local Government Council which is the Third term of Government has democratically elected leaders to pilot its affairs

12. Finally the APGA Legislators should checkmate the excessive of the Executive and be a catalyst for Sustainable Development Through legislation

Finally the Training come to an end by a closing speech by His Excellency Dr.Alex Otti who commended the legislators and other facilitators for their patience and urged the members elect to be focused and committed to the course and continue to sustain the tempo over the governance of the state until when the tribunal will upturn the Election and return the stolen mandate, He charge them to use the knowledge Gained from the capacity building to ensure quality legislations and oversights of the Executive in the State.