Maryam Babangida For Burial On Wednesday 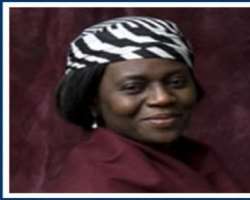 DELTA, NIGER STATE DECLARE MOURNING
BENIN CITY (THEWILL) – THEWILL has been informed that the remains of former first lady, Hajiya Maryam Babangida, who died on Sunday at the University of California Jonnson Comprehensive Cancer Centre in Westwood, Los Angeles, California, after a protracted battle with ovarian cancer will be buried tomorrow at 11.a.m.

Sources say she will be buried beside the mosque at the hilltop mansion of the Babangida's in Minna, Niger state.

Meanwhile, Delta State government has declared a two-day mourning period in honour of the deceased.

Governor Emmanuel Uduaghan made the announcement when he paid a condolence visit to the Okogwu family compound in Ogbe Ogo Quarters in Asaba adding that the state would be involved in the funeral preparations for the Asaba born former first lady.

“We are going to be actively involved in all the activities, we are here to pay our official condolence and because details of the funeral arrangements are not yet known, we will liaise with you to know what needs to be done.

“But as a state government we have to start with declaring two days of mourning and during the period, we should all be in a spiritual mode to reflect and remember her and think of what she has done in impacting of the lives of every Nigerian.

“When the history of Delta State is written, Maryam's name will occupy a prominent position,” Uduaghan said.

Ambassador Leonard Ezenweani Okogwu, an older brother, and head of the Okogwu family, received Uduaghan and his team.

Niger State Government has also declared a three-day mourning. In a statement issued in Minna on Monday and signed by the Commissioner for Information and Communications, Alhaji Aliyu Baba Barau, the Governor, Dr. Mu'azu Babangida Aliyu, said the period would enable citizens of the state acknowledge the immense contributions of the deceased.