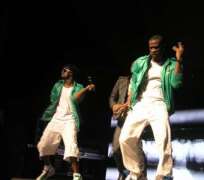 Wave-making Nigerian singers, Paul and Peter Okoye, popularly known as Psquare, have made their country proud by emerging the Artiste of The Year at the 8th KORA All Africa Music Awards held in Burkina-Faso on Sunday.

The twin brothers are now N150 million richer as the award attracts a cash prize of $1 million.

The award plaque and prize were received by an aide of Burkina-Faso's president on behalf of Psquare who was unavoidably absent at the event.

As at time of the event, the Danger crooners were in London performing at a concert, having commenced their tour of Europe few days earlier.

Speaking with nollywoodgists.com on phone from London yesterday, Peter said the award was a welcome development, adding that the group would not rest on its laurel or disappoint its fans.

“We will dedicate the award to God, then our fans all over the world. They've been showing us love and massive support, and we promise to always give them the best,” Peter noted.

nollywoodgists.com gathered that the success of Psquare at the award was due to the fact that they are hot cake in all African countries.