I had no quarrel with Patience Ozokwor - Onyeka Onwenu 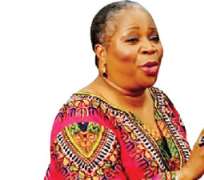 Renown artist, Onyeka Onwenu, has dismissed as false reports that she had a shouting match with  Nollywood actress, Patience Ozokwor, for allegedly having access to the Presidential Villa without reverting to her.

In a statement signed by her Special Assistant, Lami Makoji-Ojo, Onwenu, who is the Director General of the National Centre for Women Development, described the report as a lie from the pit of hell, adding that she had never had a spat with Ozokwor.

Onyeka said she was shocked and disappointed by the false report, ostensibly planted to damage her hard-earned reputation.

'Let it be placed on record that the said story is false in its entirety. It is obviously a figment of the sponsor's depraved imagination, as Lady Onyeka Onwenu does not control access to Aso Rock, nor was involved with the disbursement of funds to any group,' she said.

'Mrs. Onyeka was never in a meeting with Patience Ozokwor or any artist for that matter and was never involved in a quarrel or fight with anyone, the statement said.

The alleged quarrel between the two actresses is said to be over the control of the disbursement of President Goodluck Jonathan's campaign funds, a development , which Ozokwor has also denied.

In a separate statement, Ozokwor said there was no truth in the said report which said she was involved in a fight with Onwenu.

Ozokwor said, 'I really do not know why people write what they can't investigate. Ms. Onyeka Onwenu and I do not have any issues. I have never been to her office before and she has never been to mine.

'We see at different functions and greet ourselves with respect accordingly. Why should they write false stories about us just to sell their papers. Anyone who stains my name that I have struggled to build will have to answer to God in heaven.

I am not a new act that will be looking for scandals on the internet. If I have issues with anyone, I walk up to the person call him or her and trash it out and then move on,' Mama G, said.