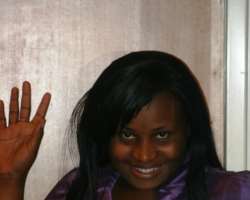 Popularly known as Lizzy, Elizabeth Efe Era is one of the twelve ladies that challenged for D'banj's ultimate kokolette crown in the Koko Mansion. Although she did not win at the reality show, she stayed 35 days in the mansion, blessing housemates and home viewers with her emotions and drama.

The 27 year-old is an Ibadan born indigene of Edo State, from a family of eleven siblings. She was the oldest of the lot in the mansion. This busty undergraduate of Economics from the University of Uyo spoke to us about her stay at the mansion, plans for future and the positive experiences she is taking with her from the mansion into the world of reality.

How did you get into the Mansion?

I was on a date with a friend, Isaac Umana back in Akwa Ibom when I saw the advert on television. He encouraged me to enter for the show but I was reluctant because I thought I was too old. When I told my aunty about it and she gave her consent, I decided to give it a try and bought the form. Although I know I had the intelligence and other qualities advertised, but I was a little bit unconvinced about my age being acceptable. The advert said age 18 to 30 but I thought the focus was going to be on people between 18 and 22. Then I was picturing the kokolette to be some sleek, slim under-16 girls, but with encouragement from my aunt and friend I finally registered.

Where you then convinced you were going to be chosen when you were invited for auditioning?

At the audition, I was even less convinced as I saw the queue and heard that over 23 thousand girls registered. But I prayed about it and told God what I wanted; the truth is I was excited and felt favoured when I was finally called.

Any close friend or housemate that you couldn't tolerate?

I kept my friendship with all at the same level; I was close to anybody. Talking about tolerating, there were a lot of attitudes at the mansion but I want to believe there was none I couldn't deal with.

Memorable moment at the mansion?

I won't forget the day I had a quarrel with one of the housemates, Victoria. It was really bad. I overreacted and up till now I still haven't forgiven myself for doing so. But we've both put it behind us and we speak once in a while on the phone.

How did you take your eviction?

I didn't feel pain or regret, because I realised it was a game and walking out of the blue door (eviction) doesn't make you a loser. I just hoped that the crown would be given to the right person that would represent us better.

What did you take out of the mansion?

I took out positives like etiquette, (proper) dress sense. I use to be a tomboy, but now I wear high heels. Although I'm not very comfortable with them, I can walk with them. I also learnt anger management; before I got into the mansion I was a prone to anger but now, after the various trainings I think I can manage my anger. I also learnt it's not enough for you to be a star; you still have to have something inside of you that you can deposit in other people.

Aside the morals and etiquettes do you think the popularity will help you build up a career?

I intend to set up an NGO much later in the future about Youth Empowerment.

I'm in my final year at the university so I'll go back and get my degree. Then I want to run an NGO and a talk show strictly on youth empowerment. I want to let them (youth) know they have something in them that they are owing the society; let them know there are people out there who depend on them doing something good. I want to help them bring out there potentials to make them realise they have a lot to give to the society.