Exposed! son of ex-chairman of 1st bank attempt to blow up Northwest Airplane 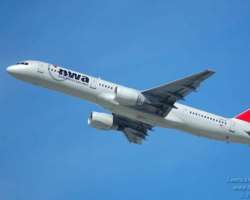 A Nigerian man who said he was an agent for al-Qaida tried to blow up a Northwest Airlines plane Friday as it was preparing to land in Detroit, but travelers who smelled smoke and heard what sounded like firecrackers rushed to subdue him, the passengers and federal officials said.

Flight 253 with 278 passengers and 11 crew members aboard was about 20 minutes from the airport when passengers heard popping noises, witnesses said. At least one person climbed over others and jumped on the man. Shortly afterward, the suspect was taken to the front of the plane with his pants cut off and his legs burned, a passenger said.One U.S. intelligence official said the explosive device was a mix of powder and liquid. It failed when the passenger tried to detonate it.

"It sounded like a firecracker in a pillowcase," said Peter Smith, a traveler from the Netherlands. "First there was a pop, and then (there) was smoke."Smith said a passenger sitting opposite the man climbed over people, went across the aisle and tried to restrain the man. Syed Jafri, another passenger, said he saw a glow and smelled smoke. Then, he said, "a young man behind me jumped on him.""Next thing you know, there was a lot of panic," said Jafri. Smith said the heroic passenger appeared to have been burned.

The White House said it believed it was an attempted act of terrorism and stricter security measures were quickly imposed on airline travel. It did not specify what those were.

The incident was reminiscent of Richard Reid, who tried to destroy a trans-Atlantic flight in 2001 with explosives hidden in his shoes, but was subdued by other passengers. Reid is serving a life sentence.

The man was being questioned Friday evening. An intelligence official said the Nigerian passenger was being held and treated in an Ann Arbor, Mich., hospital. One passenger was taken to the University of Michigan Medical Center in Ann Arbor, hospital spokeswoman Tracy Justice said. She referred all inquiries to the FBI.

The trauma burn center at the hospital said it did not have Abdul Mutallab in its unit.Flight 253 began in Nigeria and went through Amsterdam en route to Detroit, said Rep. Peter King, R-N.Y., the ranking GOP member of the House Homeland Security Committee.

A spokeswoman for police at the Schiphol airport in Amsterdam declined comment about the case or about security procedures at the airport for Flight 253. Schiphol airport, one of Europe's busiest with a heavy load of transit passengers from Africa and Asia to North America, strictly enforces European security regulations including only allowing small amounts in hand luggage that must be placed inside clear plastic bags.

There was nothing out of the ordinary about the flight until it was on final approach to Detroit, said Federal Aviation Administration spokeswoman Elizabeth Isham Cory. That is when the pilot declared an emergency, she said. The flight landed at 12:51 p.m. EST, she said.

According to the airline, eight flight attendants and three pilots were on board.Smith said while he was leaving the plane, he looked at where the man had been sitting and saw a pillow that seemed to have been burned. Melinda Dennis, who was seated in the front row of the plane, said the man involved was brought to the front row and seated near her. She said his legs appeared to be badly burned and his pants were cut off. She said he was taken off the plane handcuffed to a stretcher. President Barack Obama was notified of the incident and discussed it with security officials, the White House said. It said he is monitoring the situation and receiving regular updates from his vacation spot in Hawaii.

Federal officials said there would be heightened security for both domestic and international flights at airports across the country, but the intensified levels would likely be "layered," differing from location to location depending on alerts, security concerns and other factors.

Passengers can expect to see heightened screening, more bomb-sniffing dog and officer units and behavioral-detection specialists at some airports, but there will also be unspecified less visible precautions as well, officials said.

The FBI and the Homeland Security Department issued an intelligence note on Nov. 20 about the threat picture for the holiday season, which was obtained by The Associated Press. At the time, officials said they had no specific information about attack plans by al-Qaida or other terrorist groups.

In 2003, al-Qaida leader Osama bin Laden purportedly marked Nigeria for liberation in a recording posted on the Internet, calling on Muslims in the oil-rich country to rise up against one of the "regimes who are slaves of America." But links to al-Qaida remained rare, though security forces claimed to break up such a linked terror cell in November 2007.

Security at Nigeria's two major international airports in the capital Abuja and in its megacity Lagos remains a point of concern. Uniformed federal police officers often focus their time on keeping hagglers and taxi drivers out. Bags quickly pass through X-ray scanners and those watching incoming passengers do not typically conduct tests for explosive residue on passengers' carry-on baggage or shoes. At the gate, airline workers often check passengers again with handheld metal detectors before they board their flight.

Delta, which is days away from obtaining a single operating certificate from the FAA to fully integrate itself and Northwest, has been hosting military personnel who have to travel over the holidays in a lounge at the Detroit airport.