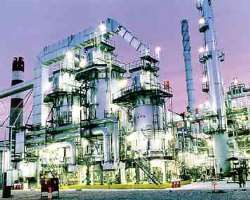 A refinery.
Between 1990 and 1991, two years after the 150,000 barrel-per-day new Port Harcourt refinery began operations, a total sum of $280m was made from petroleum product exports from the plant, our correspondent has gathered.

Subsequently, the usual negligence by government set in and the refinery started stumbling from one crisis to another and eventually today it is lying comatose because of power problems.

The pioneer Managing Director of the new Port Harcourt Refinery, Mr. Alex Ogedegbe, in an interview with our correspondent, said, 'Between 1975 and 1990 , when the Federal Government took over from the private refiners at the Old Port Harcourt refinery and constructed three new refineries, each new refinery worked well and produced as designed, with Nigerian workers under expatriate training and supervision.'

'By 1990 with the commissioning and successful operation of the latest, New Port Harcourt refinery, the local demand for white products (petrol, kerosene and diesel) had been met by the supply from all the local refineries. To the extent that export of petroleum products from the New Port Harcourt Refinery in 1990 was valued at $124m plus local product supply valued at N4bn. The corresponding values for 1991 were $156m plus N5bn.'

He said, 'For each new refinery built by the FG, two years worth of spare parts and other critical items of operating consumables were always purchased with the original funding. Therefore it was relatively much easier to operate the new refinery as only limited funding was required from the Federal Government in the first few years of operation. Therefore the interference from government during those first few years was minimal. Hence the refinery with new equipment, systems, well trained and contented staff usually ran well and produced as planned with few problems.'

'But as the operating years ran into three, four and five, the problems began with underfunding and delays in the release of even the smaller amounts approved by the Federal Government.

'Slowly but surely, the lack of adequate and timely maintenance began to take its toll on the availability of equipment and systems for smooth and continuous operation. The plant on-time efficiency began to reduce and capacity utilisation which in PHRC averaged 95 per cent in 1990 fell to 80 per cent in 1993.'

Ogedegbe added, 'By the year 2000 it had fallen to about 55 per cent. This had been the same pattern for Warri and Kaduna Refineries from inception. Since 1995 to date NNPC has reportedly spent over $1bn on rehabilitation and major repairs without much to show for the expenditure.'

The story of the Nigerian refineries which began 43 years ago has been that of sleaze, incompetence and political patronage. Although, the refineries have a combined capacity of 445,000 barrels per day, it has been long since they ever performed anywhere near the installed capacity.

And it is of recent that Warri and Kaduna refineries started performing averagely well but analysts have reasoned that the performance could just be a flash in the pan.

Coming on the heels of Warri Refinery was the 110,000 barrel- per -day Kaduna refinery, commissioned in 1980 and later the 150,000 -barrel -per- day new Port Harcourt refinery was commissioned in 1989 by the Babangida government. The refineries' total installed capacity of 445,000 barrels is designed to refine about 18 million litres of petrol per day, about 60 per cent of Nigeria's petrol needs but the country has been importing virtually all its petrol and other product needs because the refineries have been working in fits and starts.

When the Warri refinery was established in 1978, the Manufacturers, Snamprogretti of Italy, mandated that the refinery must be undergoing Turn Around Maintenance every two years, and it did in 1980 and 1982. The same TAM schedule also applies to the other refineries. However, as from 1985 upward, the story changed as the TAM was not being done as scheduled again because money was not being provided as at when due. This problem also applies to the other refineries.