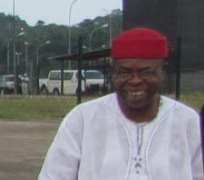 All Progressives Congress (APC) in Delta State has lost one of its key stakeholder and a Chieftain. He is Chief Napoleon Okobia, a Justice of the Peace who died after a brief illness last Thursday at the University of Benin Teaching Hospital (UBTH).

Political associates and members of the APC family have been visiting the Okobias and signing the condolence register, many describing him as a forthright politician.

Delta APC 2015 governorship candidate, Olorogun O’tega Emerhor (OON) in a statement signed by his Director of Media and Political Communication, Dr Fred Latimore Oghenesivbe said “Chief Okobia will be remembered for his lofty political ideas, strategies, foresight and leadership skills which helped positively to project the party in Delta State.

“The APC family is pained by the exit of our leader and true statesman at a time his wealth of political experience is needed more than before; especially as we re-strategize to rescue Delta State from the opposition which for 16 years mismanaged the inestimable resources of our oil rich state.

“We are indeed in grief, nursing the pains of his sudden death with the entire Okobia family. He was one of our political technicians who offered useful suggestions that enabled us to take the APC to the enviable level it is today in Delta State. We pray God to grant the family the fortitude to bear the painful demise of this great Deltan and political icon.”

Oghenesivbe quoted Emerhor as saying that the party will liaise with Okobia’s family and his political associates to give him a befitting burial, adding that the deceased was a dedicated and trustworthy progressive who committed time and resources towards the promotion and rapid growth of APC in the State.

Chief Napoleon Okobia hails from Eku Community in Ethiope East Local Government Area of Delta State. He was aged 68 years and until his death, Okobia was a vibrant politician and business mogul, the statement added.