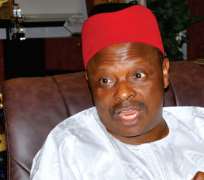 Kano State Governor and senator-elect Rabiu Musa Kwankwaso has advised the leadership of All Progressives Congress' (APC's) to come out fast with an acceptable zoning formula for the National Assembly's leadership positions.

Kwankwaso, who spoke to reporters in his office in Kano at the weekend, said any delay could 'cause confusion and mess up the entire system'.

According to him, the Peoples Democratic Party (PDP) has hired mercenaries to infiltrate the APC with the sole aim of retaining the National Assembly's leadership, particularly at the Senate.

The senator-elect warned that it would be a dangerous trend, if the PDP is allowed to lead the Senate in the next political dispensation.

He, therefore, insisted that something must be done to avert an impending leadership tussle within the APC over who becomes what at the Senate, adding that such would give the PDP an opportunity to use its experience in the game to muster support, even from the APC.

According to him, the APC should come out with acceptable guidelines for zoning. If delayed, the party might not meet the expectations of the people, particularly at the National Assembly level, he said.

Kwankwaso noted the tussle for the House of Representatives Speaker in 2011 when Alhaji Aminu Tambuwal emerged Speaker.

He claimed that Tambuwal's emergence was made possible by members of the opposition, who backed him.

The governor said the PDP might want to adopt the same strategy to retain the leadership of the Senate.

The PDP as an experienced party in this game,  Kwankwaso warned, might want to capitalise on this mistake, 'which I know the APC national leadership don't want it to happen because we won the elections and we shall continue to play the game as one family'.

He added: 'I am one of those experienced in this game. I was a deputy Speaker in 1991. So, the issue of leadership is very important. The party should come out with guidelines, so that confusion can be reduced to the barest minimum.'

The senator-elect said the May 29 handover would complete the circle of his administration and promised to support the incoming administration of Dr. Abdullahi Umar Ganduje.

On media reports that he was lobbying to become the minister of the Federal Capital Territory, Kwankwaso said: 'I have never discussed with anybody on whether I have any interest in any ministerial appointment. I am a politician, who is ready to serve in whatever capacity my party and the people deem proper.'

He thanked Jigawa State Governor Sule Lamido for naming a street after him and other members of the G7 Governors.

Kwankwaso dismissed the petition against his election at the tribunal, saying: 'On the issue of my election being challenged in a tribunal, it's not something to worry about as they have no case. They are just wasting their time and we are used to their antics.'