My friends have deserted me - Jonathan 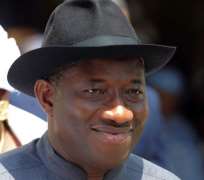 The reality of life has dawned on out-going President Goodluck Jonathan as he lamented, yesterday, that his so-called friends have deserted him having lost the last presidential election to the opposition All progressives CongressAPC, candidate, General Muhammadu Buhari.

Speaking at a thanksgiving and farewell service in his honour at the Cathedral Church of the Advent, Life Camp, Gwarinpa, Abuja, President Jonathan said, however that he expected more of his friends to leave him. The president declared that he was ready to pay the price for his refusal to interfere with the electoral process which he ensured was carried out to its logical conclusion.

He also said his decision to concede defeat at the election did not go down well with some of his ministers and aides and jokingly expressed the hope that his wife, Patience will not follow the example of the wife of former South African Apartheid leader, F W De Klerk, who divorced her husband for his decision to end the minority rule in the Republic of South Africa (RSA).

He then expressed appreciation to Nigeria and Nigerians for giving him the opportunity to serve in various capacities, reiterating his willingness to make the ultimate sacrifice in the interest of the nation.

His words: 'I believe there are reasons for everything. Some hard decisions have their own cost, no doubt about that. I ran the government in such a way that stabilized certain things like the electoral process and other things that brought stability to this country and took very costly decisions which I must be ready to pay for.

'Some people come to me and say 'look at this person or that person, is he not your friend who benefited from you, has this person not benefited from your government ? Imagine what he is saying'? I often tell them that worse statements will come. If you take certain decisions, you should know that those close to you will even abandon you at some point. And I tell them that more of my so-called friends will disappear. When FW De Klerk took the decision to abolish minority rule in RSA, even his wife divorced him. I hope my wife will not divorce me. But that is the only decision that has made RSA to still remain a global player by this time. If we still had that minority rule there, by this time, nobody will be talking about RSA.

'If you take certain decisions, it might be good for the generality of the people but it might affect people differently. So for ministers and aides who served with me, I sympathize with them, they will be persecuted. And they must be ready for that persecution'.

While expressing appreciation for what God has done for him and his family, President Jonathan said he had all the reasons to thank God.

'Very few of those in my age bracket have been that lucky. All through my education I was on government scholarship. I have not suffered lack not because I worked harder, but it was by God's grace.

Ready for the supreme price
'When I look at the whole picture of my life up to when I became the president of this country, I give glory to God. And I tell myself that if soldiers and police officers who never received 0.5 per cent of the benefits that I have received from the state can lay down their lives for this country, I should be ready to do anything in the interest of Nigeria including paying the supreme price.

'As long as I live, I will continue to do my best for the state because the state has helped me as a person.

President Goodluck Jonathan and the First Lady, Dame Patience receiving  a gift presented by the Church of Nigeria, Anglican Communion during  the thnaksgiving service.

Speaking on his decision to concede defeat which he said did not go down well with some of his ministers and associates, President Jonathan noted that the most important thing is that 'the ordinary people appreciate what we did.

'It is not what the elite or the privileged few talk or say about you but it is what the majority of the Nigerian public think about your actions and inactions that matter. We came to Abuja peacefully and we are returning peacefully', he emphasised.

While thanking the church and Nigerians for standing by him, President Jonathan went philosophical, saying that the outcome of the elections was the will of God.

'Even for the election, we had people who supported us all over the country but things went the way they did because God wanted it that way for a purpose. We will continue to pray for the peace of the country and for the success of the incoming administration.

'When the country is in good shape, people benefit. When things are going well, people are happy. You don't need to know Mr President or Mr Governor. The issue is not about Jonathan or Buhari or any other person. The issue is how the government functions. Stability, buoyant economy that will enable Nigeria to move forward and live happilly is our interest and that is my prayer point. All religious groups should pray for the country', he said.

Thanksgiving
In his sermon, Primate of the Anglican Communion, Nicholas Okoh, said thanks giving is for good things and not bad situations.

Reading from 1 Thess 5:18, the Primate said the will of God can mean some uncomfortable situations.

'When Jesus was going to the cross it was not a pleasant experience but today we have Good Friday. To give thanks the christian must be a strong believer, so a child of God's role is to bow to the situation. We are here to join the president to give thanks to God as he rounds off his tenure. When he started he gave thanks to God.

'The first one is the privilege to be President of Nigeria. We are over 170 million, and if the qualification was the tallest, wisest, strongest, he would not have qualified. Having been deputy governor, governor, vice president, acting president and president, God has been good to him. It is a rare privilege which may not come in many years', he said.

Okoh commended the President for his contribution to the country's development saying that the legacy of the Jonathan presidency will last for a long time.

'We also thank God for your contribution to the growth of our country. Some of the projects you initiated have been completed, some at advanced stage or at foundation stage, whatever stage it maybe, generations yet unborn will read about Jonathan that he governed from so so time to so so time. It will be studied by our children in history books, so we should thank God.

'Again, you are leaving the Villa alive. Only God knows what would have happened; there is nothing greater than life.'

He's a man of favour— Gana
In his comment, former Minister of Information, Professor  Jerry Gana described President Jonathan as a 'a man of favour, highly favoured by God.

'If you seek to understand this man you will fail because he is anointed by God for such a time as this. And, therefore, we want to thank God for this opportunity, thank God for what He has done for Nigeria through this man. A man of honour, a man of character, a man that is godly, a man that has actually held most of the executive offices in the Nigeria constitution.

'One of the things that I have been tremendously impressed by this man, is that his humility is awesome' he said.

'Never have we had such a humane, gentle and unassuming person as President Jonathan.'

He had no death squad, no statutory persecutors, no empowered witch hunters, no organised retaliators, and no penchant for vindictiveness.' Vanguard