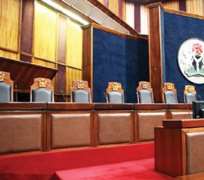 There are indications that about six different companies are at one another's jugular over who should claim about N1.8bn being the subsidy accruals to the First Deep Water Discovery Ltd, following its indebtedness to them.

It was gathered that there are several suits presently at the Federal High Court involving First Deep Water Discovery and other creditors, including Ecobank Nigeria Limited, who have approached the Court to recover their monies from the First Deep Water.

According to the findings by our correspondent, the DMO has filed a response to the committal proceeding in the Ecobank suit and that the court has adjourned for hearing on May 13, 2015.

'This matter is complicated since there are many claimants for the same monies, as such any suggestions and inferences in the same respect is subjudice.  From the above, it appears that the DMO is being blackmailed to favour Ecobank at the expense of the other parties who also have in their favour obtained judgements and court orders. But DMO has refused to be intimidated or blackmailed and it will follow the due process legally. The DMO is only an agency saddled with the responsibility for issuing Sovereign Debt Notes for subsidy payments to oil marketers, which has made it the focus of these court actions and does not pay marketers subsidy money,' said a source.

It could be recalled that Ecobank Nigeria Limited accused the Director General of the Debt Management Office, Mr. Abraham Nwankwo, of frustrating its move to recover a huge debt allegedly owed it by an oil marketing firm, First Deepwater Discovery Limited.

The bank through its lawyer, Mr. Kunle Ogunba (SAN), appeared on Tuesday before a Federal High Court in Lagos asking the court to imprison Nwankwo over alleged disobedience and contempt of court.

The DMO is the agency of the Federal Government which  processes fuel subsidy claims by oil marketers or issuing them with what is called sovereign debt notes.

Ecobank said that it had secured an interim order of Justice Mohammed Yunusa on February 25, 2015, directing DMO to transfer the outstanding fuel subsidy sum due to Deepwater Discovery Limited into the company's account with Ecobank.

The bank had claimed that Deepwater Discovery Limited had a cumulative fuel subsidy claim of about N1.8bn with DMO, out of which it claimed that N845m plus was due for payment.

In the affidavit filed in support of Forms 48 and 49, which Ogunba said were already served on Nwankwo and Abubakar, the deponent, one Ajibola Ajiboye, alleged that in spite of serving the alleged contemnors with the papers for contempt proceedings they had refused to budge.

But Nwankwo and Abubakar have, through their counsel, S.E. Omoraghon, urged the court to refuse the bank's prayer for committal order against them.

In a counter-affidavit filed in opposition to Ecobank's committal proceedings, the Principal Operations Officer of DMO, Sandra Ipigansi, maintained that the alleged contemnors were never served with the papers for contempt proceedings in personal capacities.

Besides, Ipigansi said the issue of disobedience to court order did not arise, because DMO could not have transferred the fund as directed by the court as the agency was never in custody of any subsidy claims by marketers.

According to Ipigansi, the role of DMO in subsidy claims is more or less administrative, while the money is usually kept and claimed from the Central Bank of Nigeria by the concerned oil marketers.

She claimed, 'Physical custody of the funds used for the payment of subsidy claims by oil marketers are, at all material times, kept and domiciled with the Central Bank of Nigeria.

'The 2nd defendant and its officers, by their mandate, do not keep custody of funds and do not directly touch funds meant for the subsidy claims payment and therefore lack the capacity to transfer funds to any account as directed by the court, as they do not have custody of the said funds.

'The duty of the 2nd defendant is more or less administrative and limited to the issuance of sovereign debt notes to oil marketers on the advice of the Petroleum Pricing Regulatory Agency, after due diligence and other necessary payment procedure.'

Ipigansi added that it was strange that a court would order DMO to remit the subsidy sum due to an oil marketer into the bank account of a judgment creditor.

Yunusa has adjourned till May 13 to entertain the commital proceedings and to probably make a decision.