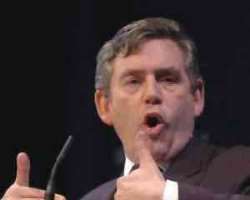 British Prime Minister Gordon Brown and David Cameron have clashed over National Insurance and spending plans, in their final Commons battle before the May 6 election.

The Tory leader attacked the PM for saying businesses backing Tory plans to curb NI rises had been 'deceived.'

Brown did not repeat the phrase but said his planned NI rise meant schools, police and NHS pledges would be funded.

Lib Dem Nick Clegg attacked both for 'colluding' to block political reform and told Brown: 'It's time to go.'

In rowdy clashes at the last prime minister's questions ahead of the general election on 6 May, Brown and Cameron each accused the other of policies that would damage the economic recovery.

Labour has been warning that Conservative plans to reduce public spending this year would threaten the economic recovery and could lead to a 'double dip' recession.

But Cameron said it was Labour's policies that threatened the economy – by raising National Insurance contributions from April 2011.

'This prime minister would wreck the recovery by putting a tax on every job, on everyone earning over £20,000, a tax on aspiration, a tax on every business in the country,' he said.

The Tory leader said the final Commons clash ahead of the general election was the 'last chance for this prime minister to show that he is accountable for the decisions he has made.'

He said Brown should admit that British troops sent into Afghanistan's Helmand province did not have sufficient equipment 'to get the job done.'

Brown dismissed the attack - saying he met every request from commanding officers adding: 'We have done our best to equip our troops.' Cameron said Brown 'takes no responsibility and blames someone else.'

The Tory leader also accused Brown of 'robbing the pension funds' - Brown said the Conservatives had cut the link between pensions and earnings and his government had introduced pension tax credits and subsidised pensioner travel.

Brown said the NI rise would protect investment in schools, police and NHS guarantees, while the Conservatives would 'put hospitals, police and our health service at risk' - claiming they would take £6bn out of the economy.