Why Abia Central Senatorial Zone, Should Produce The Next House Of Assembly Speaker 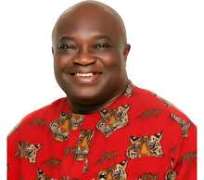 This was the opinion of majority of Abians including Comr. Okechukwu Charles, that this is the only missing link in the balancing of the Abia Charter of Equity instituted several years ago by the founding fathers of Abia State most of who are now of blessed memory but who bequeathed on the people of God's own sate, the sense of brotherliness, equity and justice.

In the Abia Central Senatorial zone under review the Executive Governor Chief T. A. Orji who is from the Ikwuano/Umuahia axis has taken the slot as a senator while Osisioma Ngwa LGA represented by Chief Mrs. Nkechi Nwogu is the vacating Senator. Hence Isiala Ngwa North and South LGAs are thus left to struggle for the available common position of speaker of the newly elected and returning legislators of the State House of Assembly.

One man, Hon. Martins Okechukwu Azubuike from Isiala Ngwa LGA is not only the most experienced, he is well grounded in legislative acumen especially as a legal luminary of many years standing who cut his legal teeth at Abuja before been elected into Abia State House of Assembly in 2003. Hon. Martins Okechukwu Azubuike therefore fits the bill of speakership soon to be vacated by Rt. Hon. Udo Oko Chukwu.

According to Comr. Okechukwu Charles, who is also the National Co-ordinator Project 2015 Door-2-Door Transformation for Good Governance in Abia State, the Secretary General of Abia Youth Assembly and a Media Consultant to the Governor elect, Dr. Okezie Victor Chibuikem Ikpeazu, who recently canvassed for the consideration of Azubuike as Speaker, "reference must always be made of the Abia Charter of Equity in the distribution of political appointments as well as allocation of public resources".

Speaking to Community Watchdog Newspapers correspondent recently at Abuja, Comr. Okechukwu Charles described Azubuike as most qualified, experienced, multi talented, out-spoken and articulated legislator in Abia State today. These he said are reasons Azubuike should be elected the new Speaker. He added that Hon. Azubuike who hails from Umuomaighinta Mbawsi in Isiala Ngwa North LGA, will offer Abia State the best legislative leadership which has eluded it over the years. This is because Hon. Azubuike, as the Chairman of the appropriation Committee of the House, has consistently championed the cause of the common man without fear or favour. He added that Hon. Azubuike is instrumental to the proposals, presentation and passage of several bills which deal on the welfare of the people. Within his Isiala Ngwa North State Constituency, according to Comrade Okechukwu Charles, he has left no stone unturned in his quest towards empowering the youths and offering the people the well deserved effect legislative representation hence his recent re-election for the 3rd time. Besides, he is a bridge builder who saw the wisdom in the zoning arrangement of the Governorship position to Abia South Senatorial zone and embraced the option at a time he was one of the most qualified and prominent politicians from Abia Central Senatorial zone who like Dr. Alex Otti, Senator Nkechi Nwogu, etc would have insisted on contesting against the party zoning arrangement. From all indications, Hon. Azubuike as a loyal and highly disciplined party stalwart is the candidate that Abia deserves as Speaker in this dispensation. Comr. Okechukwu Charles also went ahead to highlight the reward for loyalty and hard work which he insisted is promotion and more work and called on the newly elected legislators to ensure that a strong leadership emerges in the House of Assembly so as to compliment the efforts and vision of the new Governor who would lean on the support of the Assembly to succeed.