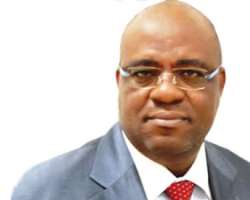 A Federal High Court in Abuja on Monday ordered the extradition of a former Managing Director of Nigerian Security, Minting and Printing Company, Mr. Ehidiamhem Okoyomon, to the United Kingdom to face criminal charges.

Justice Evoh Chukwu ordered that Okoyomon be extradited to the UK within 30 days.

He ordered the former NSMPC boss to be remanded in prison pending the time the extradition processes would be completed.

The court was delivering judgment on the extradition application filed on September 29, 2014 by the Attorney-General of the Federation and Minister of Justice, Mr. Mohammed Adoke (SAN).

The court had earlier on Monday struck out a separate suit filed by Okoyomon challenging his arrest and detention by the Economic and Financial Crimes Commission based on the request by the British High Commission in Nigeria for his extradition.

The court held in its judgment in Okoyomon's suit that the Attorney-General of the Federation having filed the application for his extradition, his suit had become academic.

The court also dismissed his preliminary objection to the AGF's extradition application.

It held that Okoyomon, through his counsel, Dr. Alex Izinyon (SAN), 'has no defence for this application and did not make any attempt to counter it.'

It also held that the AGF had satisfied all the requirements under the Extradition Act Cap E25 of the Laws of the Federation of Nigeria, 2004 for the extradition of the man who was said to have been indicted for criminal offences in the UK.

Okoyomon's lawyer, Izinyon, had argued in both the preliminary objection and in his counter-affidavit opposing the application that there was no reciprocal extradition treaty between Nigeria and the United Kingdom.

He argued that the 1931 Extradition Treaty between the United States of America and the United Kingdom as well as the London Scheme of Extradition within the Commonwealth both of which the AGF anchored the extradition application on were not enforceable in Nigeria.

He maintained that Nigeria was not a party to the treaties and that they had not been domesticated by the National Assembly in accordance with the provisions of section 12(1) of the Constitution of the Federal Republic of Nigeria.

He also argued that the London Scheme for Extradition was an agreement between the United States of America and the UK, which had yet to be domesticated in Nigeria.

He said having not been domesticated in accordance with its provisions in Article 22, the London Scheme for Extradition could not be applicable in Nigeria.

But Justice Chukwu in his combined judgment on both the notice of preliminary objection and the substantive suit, upheld the argument of the AGF's lawyer, Mr. Muslim Hassan, and dismissed Izinyon's contention.

The court held that the Extradition Treaty of 1931, made to be applicable in Nigeria in 1935, had not been repealed.

It held that the treaty was not among the ones repealed by the provisions of Decree 87 of 1966.

It also held that the London Scheme for Extradition had been domesticated in Nigeria by virtue of provisions of section 12 of the constitution.

The court held that provisions of section 12(1) of the constitution were only applicable to such treaties signed after the 1979 and 1999 constitutions of the Federal Republic Nigeria.

The UK government, through the British High Commission in Nigeria had in July 2014 requested the Nigerian government that Okoyomon be extradited to answer questions over his alleged role in the bribery allegation involving officials of the Central Bank of Nigeria, the NSMPC and the Securency International Pty of Australia between 2006 and 2008.

The offences were said to have violated the provisions of the Corruption Prevention Act of the United Kingdom.

After the hearing of the extradition application on October 22, 2014, Justice Chukwu had ordered Okoyomon to remain in EFCC custody pending when judgment would be delivered.

Okoyomon's lawyer, Izinyon, while opposing the application, insisted that there was no existing extradition treaty between Nigeria and the UK.

Izinyon added that extraditing his client to face trial in the UK when part of the crime he was being wanted for in the UK was allegedly committed in Nigeria, would amount to subordination of Nigeria's sovereignty to that of the UK.

He said, 'We don't want extradition. Since part of the alleged crime was committed here (Nigeria), we are ready to face trial in Nigeria.

'In fact, extraditing him to the UK is subordination of our sovereignty to that of the United Kingdom.

Izinyon, in adopting his preliminary objection and counter-affidavit to the extradition application, said two statutes - the Extradition Treaty of 1931 and the London Scheme for Extradition - relied upon by the EFCC were no longer applicable in Nigeria.

'Combination of these two instruments does not in whatsoever, howsoever, cannot and does not confer locus on the Attorney General of the Federation to make the application,' Izinyon said.