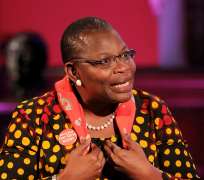 Obiageli Ezekwesili, co-founder of the #BringBackOurGirls campaign, former Nigerian Minister of Education, and former World Bank vice president for Africa, tells Al Jazeera’s Head to Head that Nigerian armed forces have committed human rights abuses in their fight against the violent group Boko Haram in the north of the country. “It clearly does have instances where human rights violations have happened,” she says.

In this new episode of Head to Head, airing 1 May 2015 at 20.00 GMT on Al Jazeera English, Oby, as she’s affectionately referred to in Nigeria, tells host Mehdi Hasan and an audience at the Oxford Union that, a year after over 200 schoolgirls were kidnapped in Chibok, northern Nigeria, by Boko Haram, the #BringBackOurGirls campaign was not a failure. “No, I wouldn’t say that we have failed. I would say that we have not been able to move the elephant.”

Oby blamed the outgoing administration of President Goodluck Jonathan for its inaction and failure to rescue the young hostages, and said she thought it was still possible to defeat Boko Haram.

Known as “Madam Due Process” for her fierce anti-corruption drive, Oby founded Transparency International in 1996, was an advisor to former President Olusegun Obasanjo, and served in two of his cabinets as Minister of Education and Minister of Solid Minerals between 2003 and 2007. After leaving government, Oby moved on to become vice president of the World Bank for Africa, where she stayed until 2012. More recently she coined the phrase “Bring Back Our Girls,” which turned into a world-famous Twitter-hashtag campaign.

Questioned by Hasan about endemic corruption in Nigeria, Oby said her country has a “political class problem,” but refused to condemn her former boss and mentor President Olusegun Obasanjo, who ruled between 1999 and 2007.

Under pressure by Hasan, she conceded Obasanjo was “aware of the elements of corruption, and it was his responsibility to tackle” them, but categorically denied he was corrupt himself. “Of course it [the government] was [corrupt]! [But] There was no way it could have been more corrupt than the government of Abacha,” she said, referring to the military dictatorship of Sani Abacha that preceded Obasanjo’s rule. Oby lamented that the government she was part of was not able to “succeed fully” in tackling corruption, and defended her own track record, saying she had not been “window dressing” for a corrupt regime and insisting - despite holding two ministerial positions in the Nigerian government, being an advisor to presidents and holding high office at the World Bank – that she was not a politician.

During the interview, Ezekwesili and Hasan discussed whether widespread poverty, inequality and corruption are at the root of the brutal Boko Haram insurgency, and debated whether World Bank policies have helped or hurt Africa’s development.

Challenged over the effects of Word Bank and International Monetary Fund (IMF) conditionalities for African countries, Oby told Hasan she would “define an exit date” for both institutions. When pressed about setting the exit date, she said she stuck to her 2008 suggestion of a 25 year deadline by 2033.

Hasan is joined by a panel of three experts: Priscilla Nwikpo, a British-Nigerian broadcaster and commentator; Richard Itaman, a Nigerian economist and researcher at the University of London, School of Oriental and African Studies; and Richard Dowden, executive director of the Royal African Society in the UK and former correspondent for The Economist.

In each episode, Hasan goes head to head with a special guest, asking the probing and hard-hitting questions few dare to ask on the big issues such faith, foreign intervention, the Middle East, US foreign policy, and the economic crisis.

Watch and embed the promo at

For more information on series four of Head to Head, visit