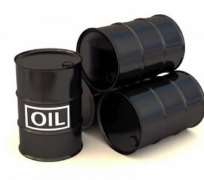 Vitol Group, the world's biggest independent oil trader, said crude prices won't drop below $50 a barrel for sustained periods because that's a level some producers need in order to invest in new supply. Gunvor Group said a rout is over.

'We still subscribe to the likelihood that over time prices still have to go back up again because you still need to invest,' Vitol Chief Executive Officer Ian Taylor said in an interview at the FT Commodities Global Summit in Lausanne, Switzerland on Tuesday. 'People won't invest unless they can make the upstream business work and it's not just U.S. shale; at $50 a barrel it doesn't work.'

Oil prices collapsed almost 50 percent last year as OPEC kept its output ceiling at about 30 million barrels a day, insisting producers outside the 12-nation group help tackle a surplus. While the U.S. pumped 9.38 million barrels a day last week, the most for the time of year in at least three decades, its output slid 0.4 percent in the past month.

Prices will trade from $50 to $70 a barrel in the second half of this year, Taylor said. Brent, the global benchmark, ended at $62.08 on the ICE Futures Europe exchange Tuesday. West Texas Intermediate, the U.S. grade, was at $55.26.

'U.S. production growth is beginning to slow down and demand is looking quite good for the year, so the combination of all of that means that probably price, if anything, moves up a little bit,' Taylor said. Prices 'overreacted to the downside' and the slump is now 'behind us,' Torbjorn Tornqvist, the chief executive officer of Gunvor, said at the same Lausanne event. The company handles more than 2.5 million barrels of crude and fuels each day, meaning it's among the world's five largest independent traders, according to data compiled by Bloomberg.

Prices need to rise to about $80 a barrel in order to attract investment and replace lost production, Marco Dunand, chief executive officer of Mercuria said. Field depletion means markets are losing as much as 5 million barrels a day from supply that needs to be replaced each year, he said. Taylor said in an interview in Cape Town on March 17 that prices could rise by the end of the year. Brent jumped by 16 percent since then. Still, an expansion of supply from shale deposits is working as an 'automatic price stabilizer' in oil markets, he said Tuesday.

The completion of refinery maintenance, which normally boosts demand for crude and adds to the supply of fuels, may hurt processing profits, Taylor said. The firm plans to run its own plants at full capacity but could alter the strategy if margins turn negative, he said. Northwest European margins will peak this year in the second quarter at $6.09 a barrel, before retreating again, Wood Mackenzie Ltd. estimated April 9.

Storing oil at sea, a trade that was profitable in the 2008-09 recession, isn't proving viable, Taylor said. Future crude prices aren't trading at enough of a premium to near-term ones to cover the cost of hiring tankers to keep barrels on ships, he said. Such an oil-price structure is called contango. 'The crude oil market remains in contango and I know we have a lot of physical oil we need to place,' Taylor said. 'Freight is nowhere cheap enough, so you need to see spreads drop significantly to make it work.'

There appears to be a surplus of liquefied natural gas globally that will persist while projects in Australia and the U.S. come online, Taylor said. While sugar markets have been 'tough,' Vitol will retain the ability trade the commodity, he said. Vitol trades more than 5 million barrels a day of crude and oil products, a January presentation on the company's website showed. That's more than any other independent oil trader, according to data compiled by Bloomberg. Agency report