Video: How Lil Kesh Shut Down #StarMusicTrek 2015 Artiste Sign on Party With ‘Shoki’ and ‘Gbese’ 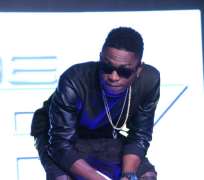 It was an exciting atmosphere at the Federal Palace Hotel on Friday April 24 as Lil Kesh took to the stage with a performance of Shoki, which set the crowd on fire. His floor-filling street anthem, which was one of the biggest songs of 2014 brought the crowd to a dance frenzy as the 2015 Star Music Trek Artiste Sign On Party kicked off in earnest.

Not content with causing havoc with one club banger, Lil Kesh brought the crowd to near-frenzy with a house-shaking chorus Gbese re o! which made the entire audience lose control. MTV VJ Ehiz was particularly taken with the Gbese fever as he joined him onstage, dancing to every style from Shoki to Etighi to the delight of the teeming audience.