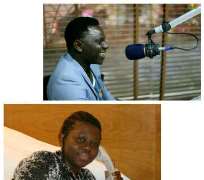 The twin sister of gospel artiste Kenny K'ore, has been kidnapped! On Friday, April 16, 2015 Ms. Taiwo Oluwatoyin Akinbode travelled to Port Harcourt, Rivers State for a job prospect when she fell into the well-set trap of kidnappers. A ransom of N5m is being demanded from the family so as to release her.

It was a well-laid job opportunity scam on the internet that attracted the unwary woman to PH - and her current ordeal.

A source close to the family claimed Taiwo's two phones had gone quiet, except when the brother was called to make ransom demands. On a number of occasions, the unfortunate woman was heard wailing for help as she was apparently being tortured.

The family has contacted the police in Lagos and Port Harcourt, the Anti-kidnapping Unit in Lagos and PH, SSS, NIA, AIG, and IGP's office, but all have proved abortive.

According to the source, "We are asking that well-meaning Nigerians support our dear brother, and his family in prayers, and in anyway possible to get his sister back safe and sound".