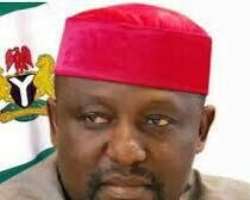 indicate a very wide margin win by the APC candidate, Rochas Okorocha. The candidate of the Peoples Democratic Party, Emeka Ihedioha is seen trailing far behind in all the results.

It was reported yesterday that Emeka Ihedioha had opted for a ministerial appointment in place of the re-run; knowing that he was going to have a backward outing. Meanwhile, his camp denies that their candidate did not contemplate stepping down for Owelle Rochas in place of a ministerial slot.

the winner. Rochas who spoke to some of his aids on the yet to be officially announced victory, dedicate

the success to all Imolites.